I didn’t get out for a long hike over the weekend, but continue to fit in a short walk every day. I went on a reconnaissance mission of the northern and southern entrance points to Porters Pass and Centennial Glen in Blackheath in order to scope out the street layout (and best points of connection) for completing the circuit at a later date. Here are a handful of snaps from those initial forays: 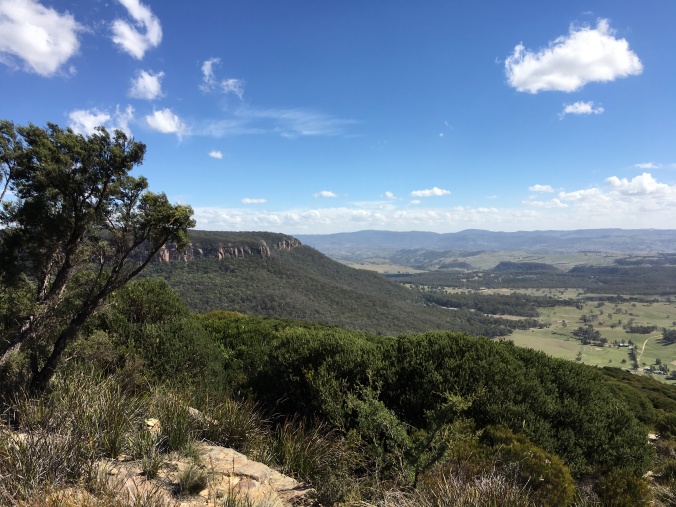 View over the Kanimbla Valley from Fort Rock

Heading northeast up the hill from Fort Rock, the track cuts a pretty swathe through the trees bordering the Mountains Christian Academy, bringing you out on Kanimbla Road

Due to the proliferation of pine needles, the path is soft underfoot and provides shelter from the wind

I noticed this variety of banksia for the first time this season, but you know how that experience of discovering something new works? Once you’ve seen it once, you start to see it everywhere. This phenomenon has a name – it’s called the Baader Meinhof phenomenon (the Baader Meinhof Complex is also a very good film) or frequency illusion. The first time I remember experiencing this was with the word ‘ubiquitous’ (a particularly fitting example). As a lover of language, I am apparently more prone to this phenomenon than most. On the downside, its prevalence is a result of cognitive bias. According to Arnold Zwicky, as quoted in John Donavon’s article (see first link above):

“The Frequency Illusion is a result of two well-known psychological processes, selective attention (noticing things that are salient to us, disregarding the rest) and confirmation bias (looking for things that support our hypotheses, disregarding potential counterevidence)…”

I try to cultivate an attitude of openness to opposing views and arguments so as not to become deluded with the notion that my own opinions speak of some universal truth, but I will confess to getting excited when I connect with minds that operate along similar lines to my own…

Glimpse of Kanimbla Valley from the Natural Viewpoint at the northern entrance to Porters Pass. I stumbled upon a young couple having sex on a nearby rock in this area. Let’s just say they were deep in the throes when I encountered them, so I retraced my steps and left them in peace. Little did they know that a party of six, the members of whom I passed upon quitting the scene, were about to converge upon the site of their lovemaking – I guess it’s the risk you take when you choose a main thoroughfare for your bed…

Things of stone and wood adjacent to Walls Cave

I also swung by Leura Cascades for the first time in some weeks as was advised by friends that the Jamison Valley was going to be closed to hikers for the foreseeable future while the NSW RFS conducted hazard reduction burns.

Top of the Cascades

First glimpse of the Jamison valley

Mt Solitary on the right, Kings Tableland stretching away into the distance on the left 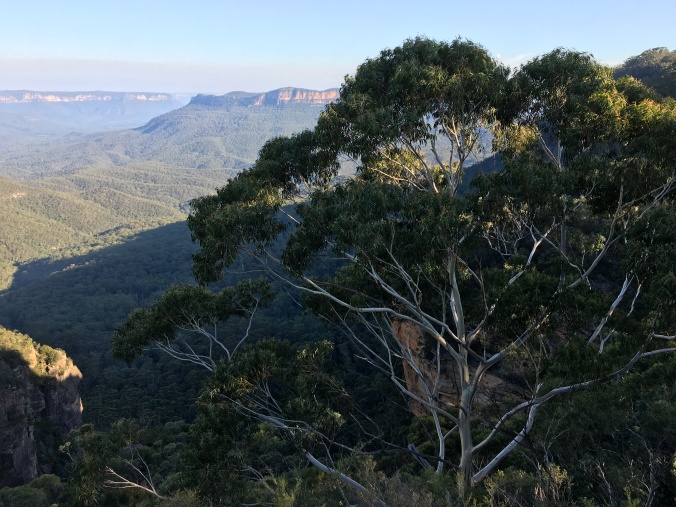 Solitary beauty. I am seriously in love with this mountain.

Books Completed – None. Lots of loving looks though…

Music Credit: The Talking Heads – This Must Be The Place
[Ed: I had to change the song – I had The Ubiquitous Mr Lovegrove by Dead Can Dance, because of the word ‘ubiquitous’ in the title. It’s a great song but the lyrics are quite depressing and not at all reflective of my current state of mind.]