Zoey and I hiked part one of the Royal Coastal trail this weekend, from Otford in the south to Garie Beach, approx 10km north. I’ve been wanting to hike the Coastal Track for over a decade, so it was wonderful to finally make a start. The entire trail is 26km and I had thought in the past about doing it in one go (either as an overnight hike – you can camp at North Era Campground – or pushing through for a hard slog single day), but this is not currently an option as the short central section, from Wattamolla to Garie, is currently closed to hikers following the January bushfires, believed by authorities to have been deliberately lit. The fire damage is clearly visible as you drive into Garie Beach, yet despite 15% of the NP having been affected by the blaze, the majority of trails in the park are open to the public once more, with the remaining closures set to be rehabilitated over the coming months. 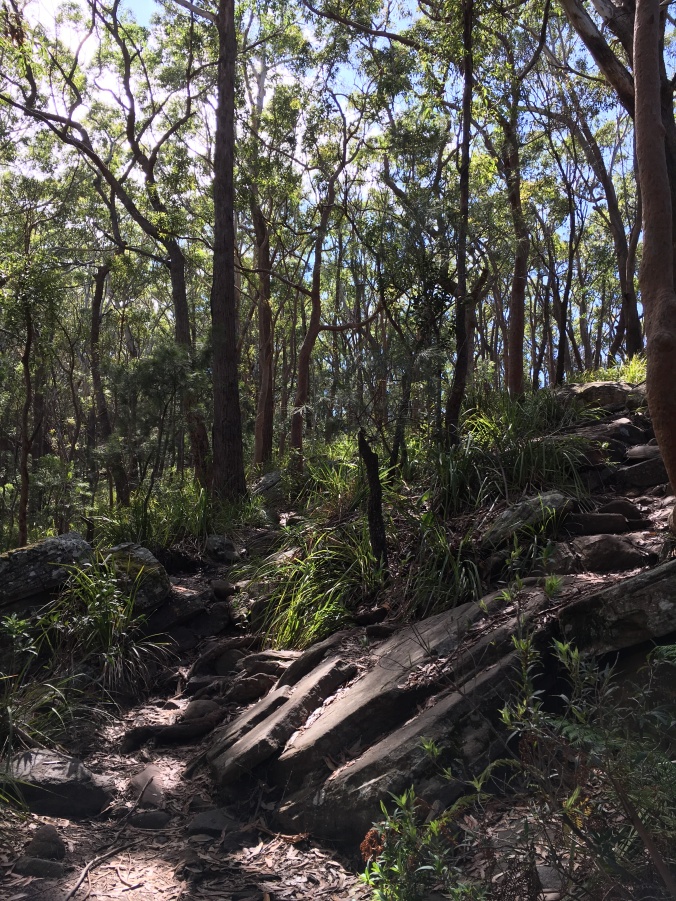 I had been told that the Royal was no fun to walk in summer because of constant exposure to sun, but the first 3-4 kms take you through lush forest with plenty of shade. Admittedly, we were in much more direct sunlight as the day wore on, but the terrain was varied, with plenty of opportunities for swimming

You climb immediately upon setting out, but the ascent is not too brutal 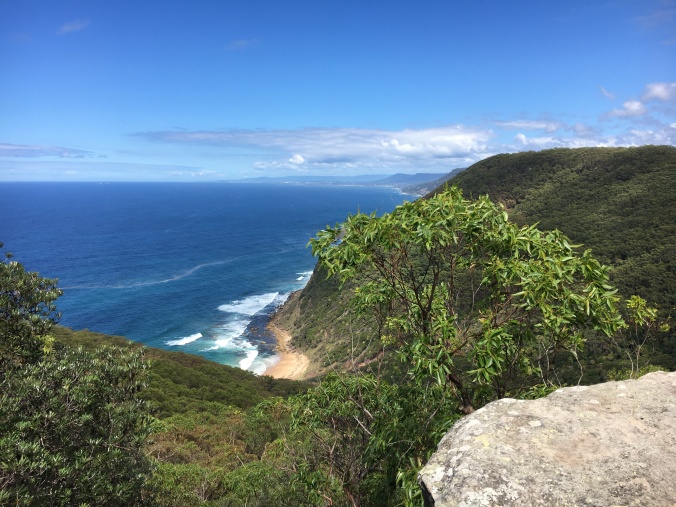 They call this section the Palm Jungle 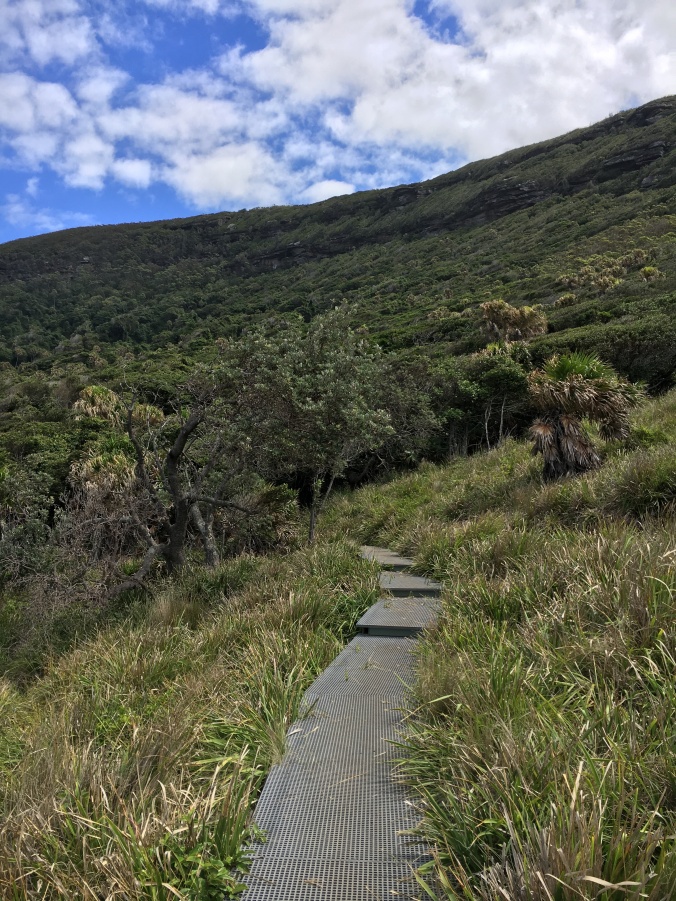 Emerging from the ‘jungle’, you come out upon a stretch of composite material boardwalk conceived by NewScape Design 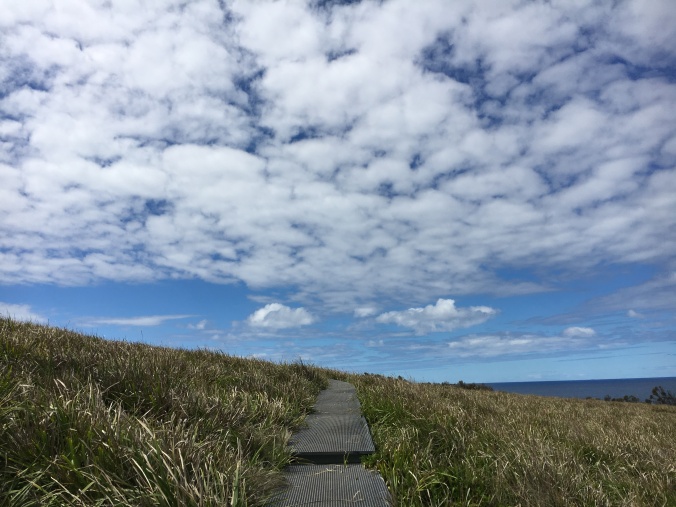 Although I prefer to walk in direct contact with the earth, the Royal receives thousands of visitors every year, and the boardwalk, which is designed to minimise our impact on the surrounding environment, weaves fairly unobtrusively through the landscape 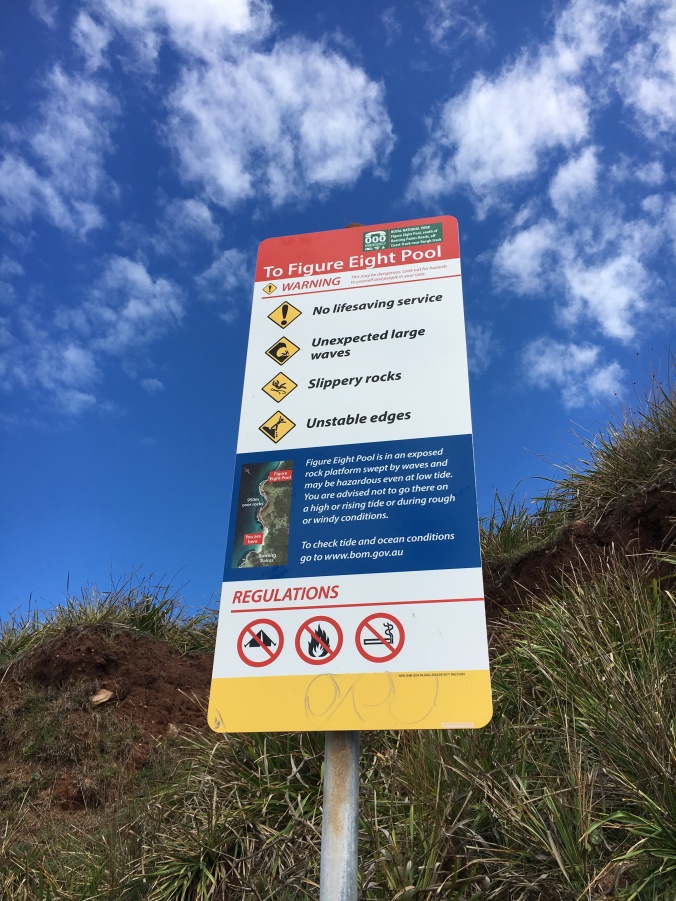 By the time we made it to the Figure Eight Pool, the tide was on its way in, so we didn’t walk all the way round there on this occasion, but we did sit in the shade of the overhanging rock ledge and watch the spray crashing over the rocky platform for a spell

I know you are not meant to find this sign funny, but I was seriously in stitches. Zoey was like: “that would so be us: Nek minnit…” This statement was rendered yet more amusing by the fact that I was out of her sight for no more than five minutes and returned with a broken toe… How did this occur? Well, I saw a guy take a momentous stack and I have a tendency to try and stop people falling when I see it happen, even if I have no chance of making the save. As he fell, I lunged forward and kicked my little toe against a rock (falling man was fine, by the way…) 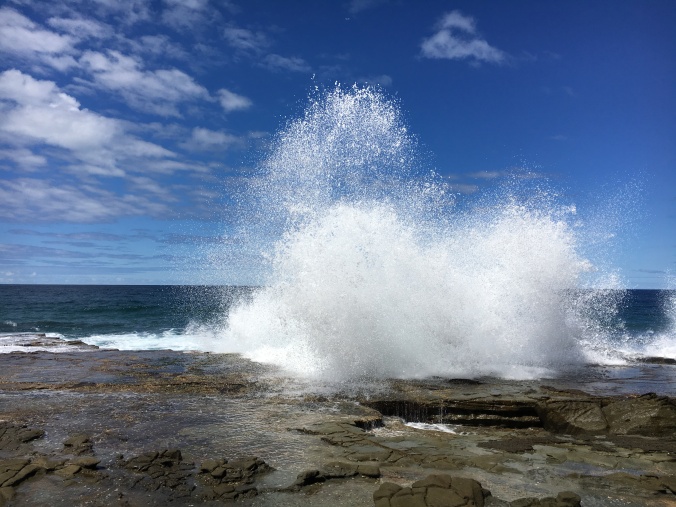 So here I was, at the halfway point between Otford and Garie Beach, with a broken little toe. As it was a 5 km walk to our cars in either direction, I figured we may as well continue north, so I sucked it up, put my foot back in my boot before the bruising and swelling manifested and gladly accepted Zoey’s offer of ibuprofen…

View from clifftop between North and South Era Beach

Yes, the hills were alive…

We passed some lovely little shacks between Burning Sands and North Era Beach, which were built during the Depression era and are currently being leased by the owners from the NPWS

This sign was attached to a rock sculpture of sorts outside of a makeshift church building at Little Garie beach. We’d seen several hang-gliders through the afternoon, and Zoey thought it symbolised ‘where hang-gliders come to die’. I thought it looked like a jellyfish church (in this reading, the jellyfish is a little sultry – see its hand there on its hip). Lee thinks it looks like a bluebottle (of which we saw many) and Kev thought perhaps an alien. I am welcoming any other interpretations or explanations of what these symbols could possibly mean…

Yep, there’s that toe again! As I said to Zoey, it makes for another good war story: i.e. “I walked for 5kms through sand and over mountains with this baby!” That’s my quota of broken bones out of the way for 2018… one would hope…

Heading west for a few days – pics to come