I returned home from work one afternoon this week still itching to hit the trail, so I squeezed in a 2 hour ramble before the sun set on another day.

I am trying to learn to differentiate between the different eucalypts that I find in the Blue Mountains area but I have my work cut out for me. According to Ian Brown:

The latest tally (see The Eucalypts of the GBMWHA) puts the number of eucalypt species found in the WHA at 96 – one of the greatest concentrations of eucalypt diversity in Australia, or anywhere on Earth, and hence an assumed centre of evolution for the group. 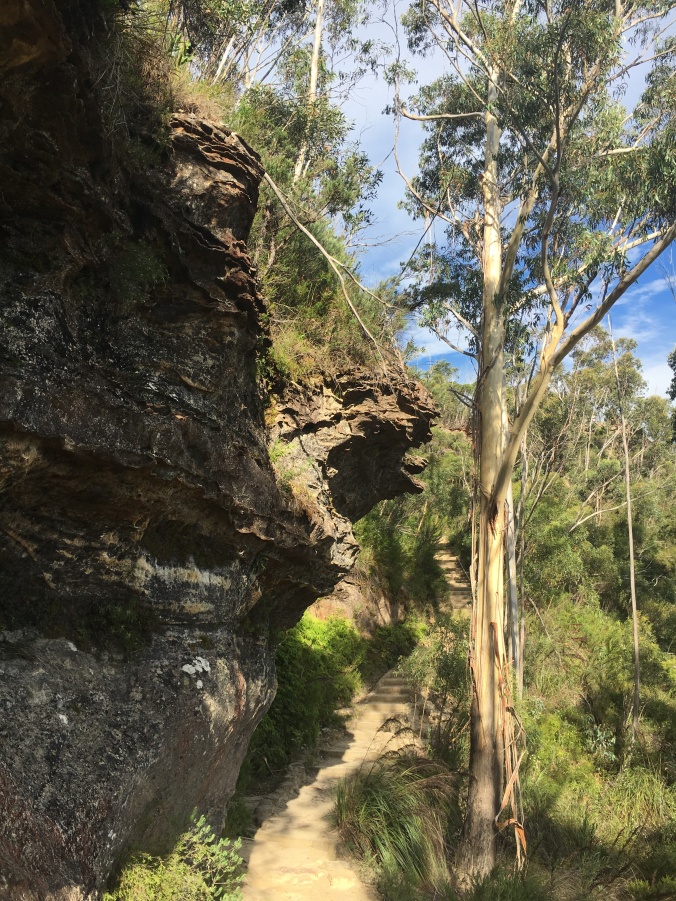 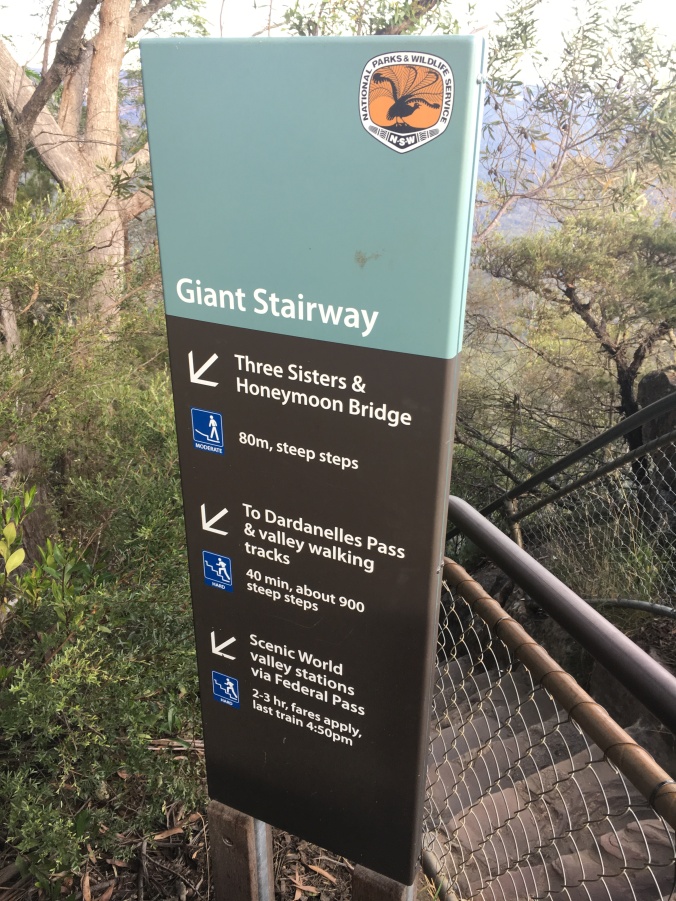 Start of the Giant Stairway 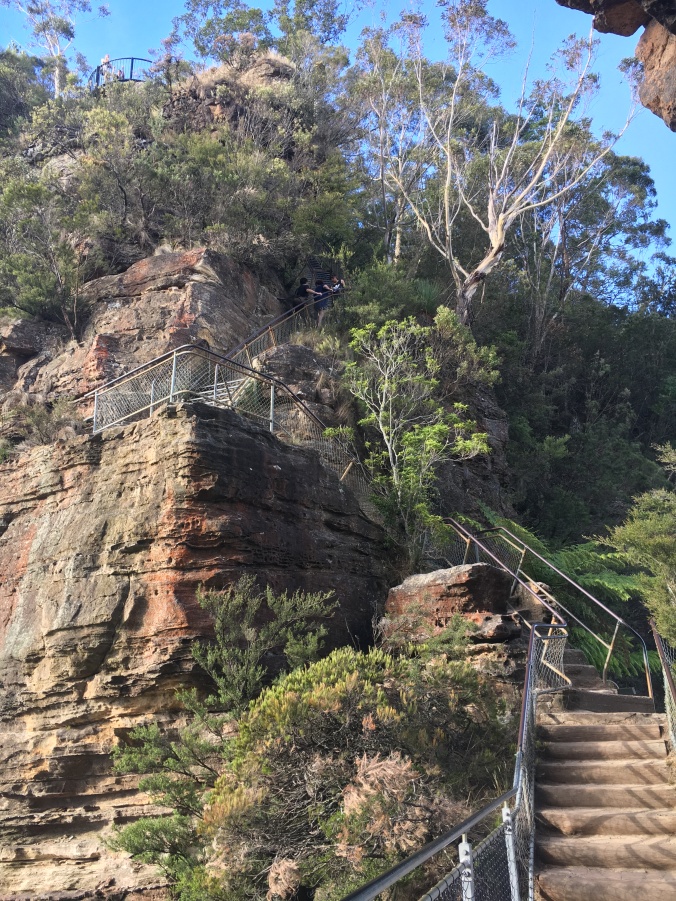 Looking up to the Three Sisters Lookout from the Honeymoon Bridge

Escarpment below Echo Point from the Honeymoon Bridge

About 900 steps into the valley

Interesting blend of stone and steel

The final staircase before you hit Dardanelle’s Pass

Silhouette from the valley floor

Near the junction of Dardanelle’s Pass and Federal Pass 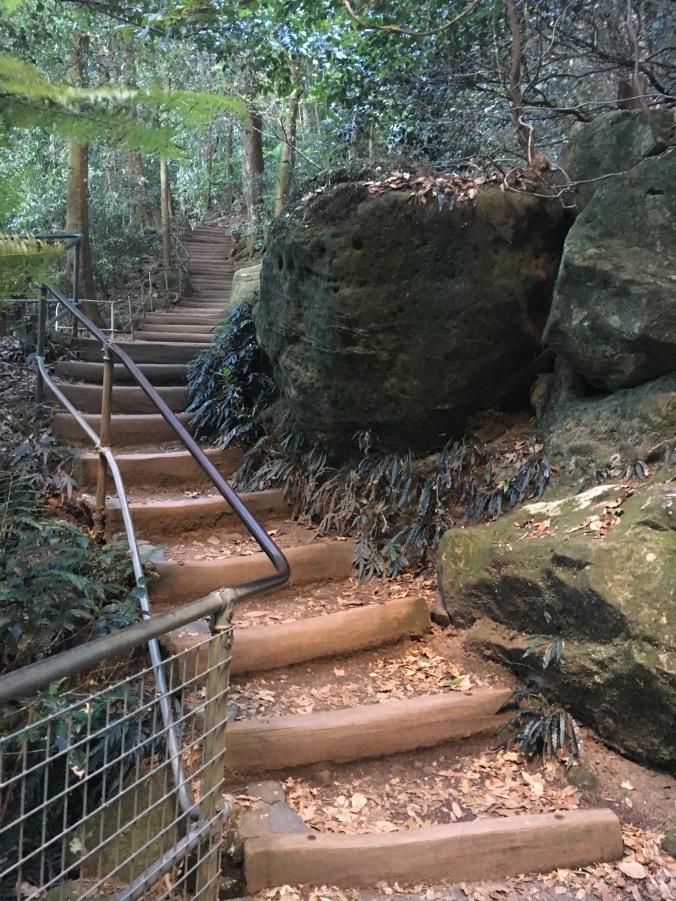 Furber Stairs side of Cook’s Crossing 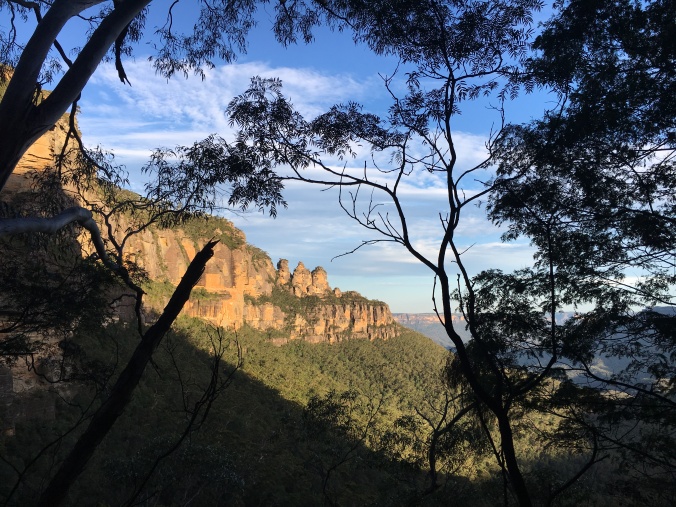 A little later in the week, I decided the catch the early morning light, departing before dawn and hiking out to Faulconbridge Pt with the rising sun:

When I lived in Sun Valley, this used to be one of my regular haunts, but I haven’t been out here in a couple of years 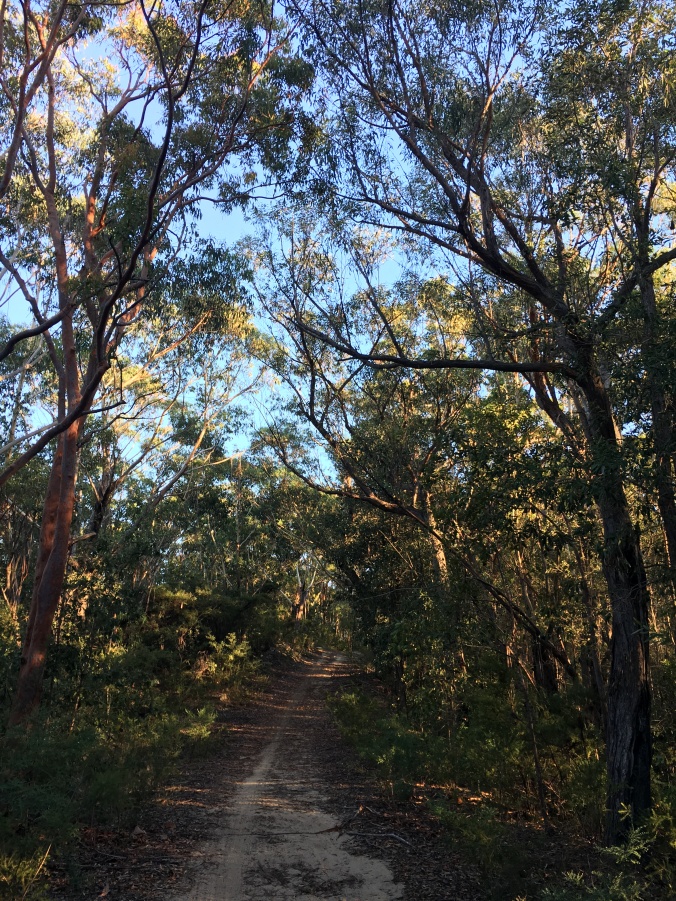 The fire trail itself doesn’t provide anything much in the way of views along the way, so lacks the spectacle of some of the upper mountains trails, but there is abundant bird life (I had memorable encounters with Gang Gang Cockatoos and Lyrebirds on this occasion) and the payoff is so worth the walk…

You emerge onto a large rock platform, with expansive views to the valley below. There is an offshoot which leads down to the Grose River about 1 km back along the fire trail. I’m yet to explore its full length – the gradient is steep but apparently there are some good swimming holes if you can handle the prospect of a two hour hike back to your car after your refreshing dip…

in 2012 I started a series of abstract renderings of the ridge-lines from various vantage points around the mountains. The collection never really got past the pages of my journal, but here is my doodle of the view from Faulconbridge Point (pretty self-explanatory, but in the event that it’s not clear: blue for water, red for escarpment)

Looking east towards Springwood Ridge and the Nepean River Valley 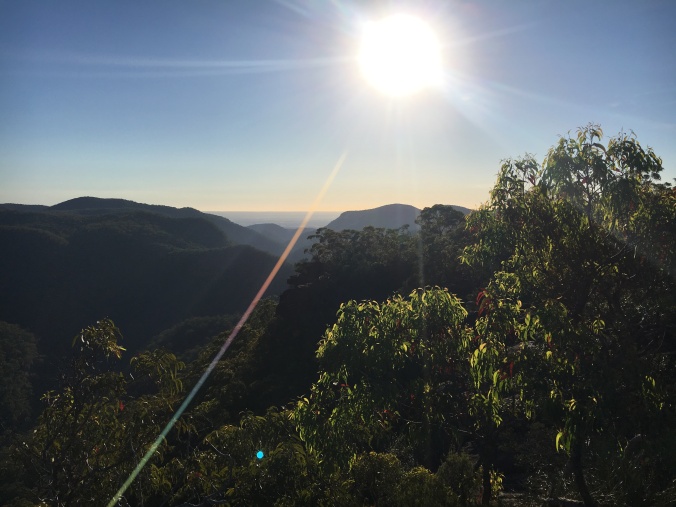 I’ll leave you with a quote from Finding Everett Ruess, the book I am currently reading:

“Everett was a loner, but he liked people too damn much to stay down there and live in secret the rest of his life. A lot of us are like that – I’m like that, Ed Abbey was like that, and it sounds like this McCandless kid was like that: We like companionship, see, but we can’t stand to be around people for very long. So we go get ourselves lost, come back for a while, then get the hell out again. And that’s what Everett was doing.

Everett was strange… Kind of different. But him and McCandless, at least they tried to follow their dream. That’s what was great about them. They tried. Not many do.” (Ken Sleight, in David Roberts, Finding Everett Ruess, p.283)

I expressed this exact sentiment in a recent letter to a friend (about these figures, the strength of their conviction, about aloneness vs companionship, about an individual’s willingness to pursue their dreams). Food for thought.

I’m off to climb a mountain. Photos to come.