After our delicious breakfast at Lou’s Restaurant in Hanover, I took Mountain Goat and her friend Puddles to a church where the pastor allows hikers to sleep in the basement, then dropped Mountain Goat at a trailhead south of Hanover so she could slackpack the ten miles into town. 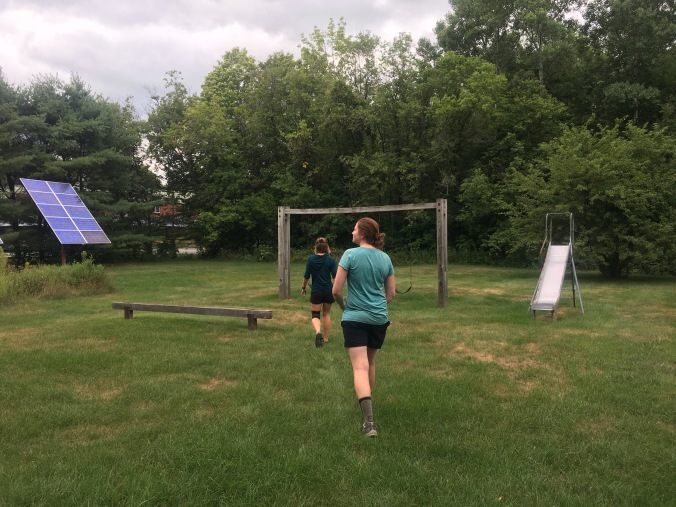 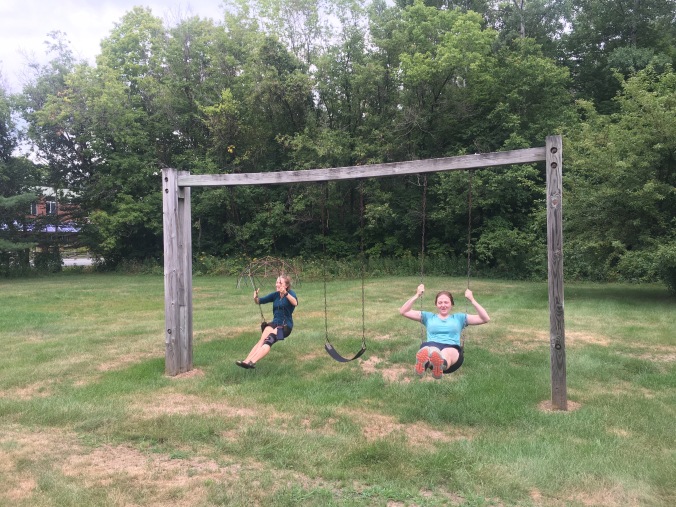 I then drove north-west through Vermont to Burlington where I spent three and a half days with my friends Sue and Rob, taking in a couple of covered bridges along the way.

One of at least four covered bridges near Northfield, Vermont

I arrived at the Stephenstermacher residence in time for homebrew happy hour 👍.

The absinthe display atop the amazing (abundantly stocked) liquor cabinet 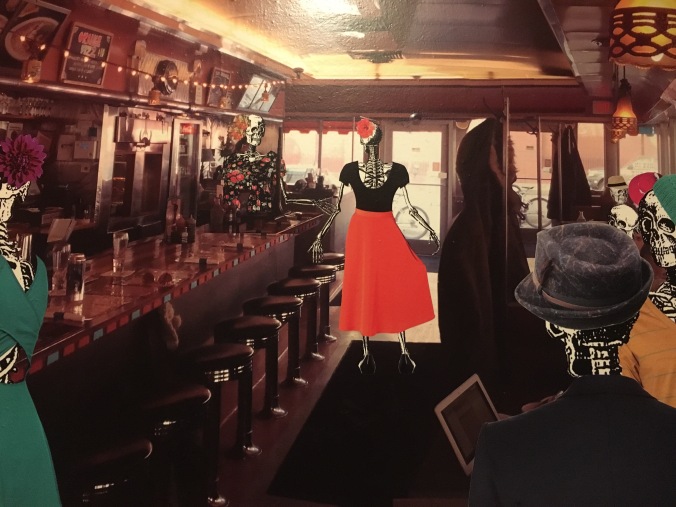 This is an image of the interior of the restaurant, also on display in the bathroom

As a senator for Vermont, Bernie Sanders has an office in Burlington, so after dinner, Rob & Sue took me for a walk through the prettily lit downtown precinct to check out his likeness on the Church Street Marketplace alleyway mural. 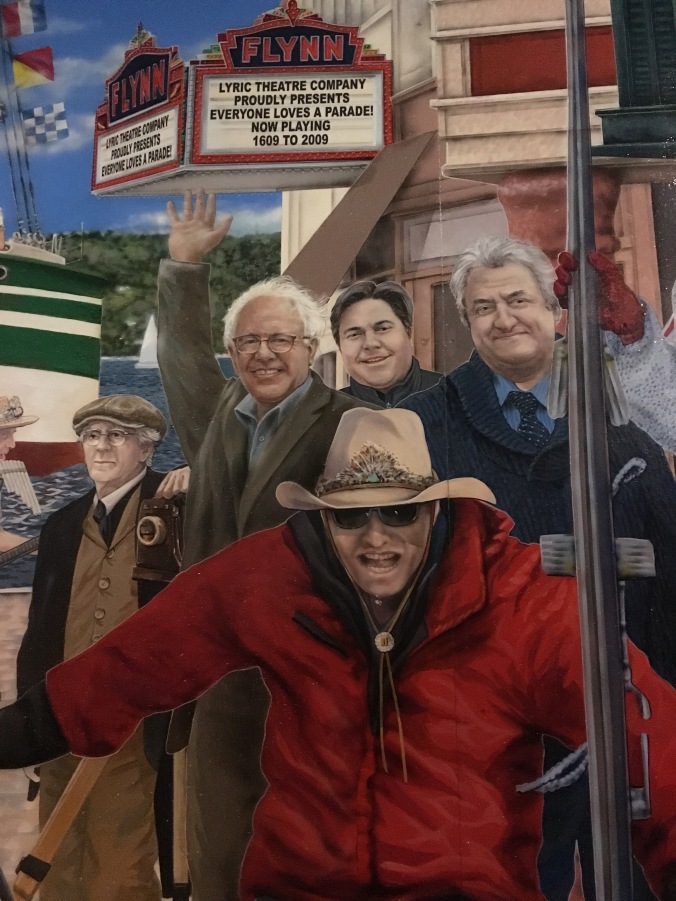 There’s Bernie waving. The mural includes figures of note from Vermont throughout history. Other noteables include John Dewey (philosopher), a couple of Presidents (Chester Arthur [1881-1885] and Calvin Coolidge [1923-1929]), Rudyard Kipling (whose Jungle Book was adapted for the screen yet again just last year), Maria Von Trapp (whose life story inspired The Sound of Music), Ben Cohen and Jerry Greenfield (of Ben & Jerry fame), Robert Frost (one of whose houses I blogged about in my earlier post: Literary Ramblings in Massachusetts, despite the fact that Frost’s farm was actually in Derry, New Hampshire), John Deere (one of whose agricultural equipment manufacturing factories I received a guided tour of while in Heidelberg in 2014 – a surprisingly fascinating experience), Norman Rockwell (whose museum I visited while in the Berkshires of Western Massachusetts), and the members of Phish (a band that I had not previously encountered, but would have the good fortune of hearing a wee sample of for the first time while here in Burlington). 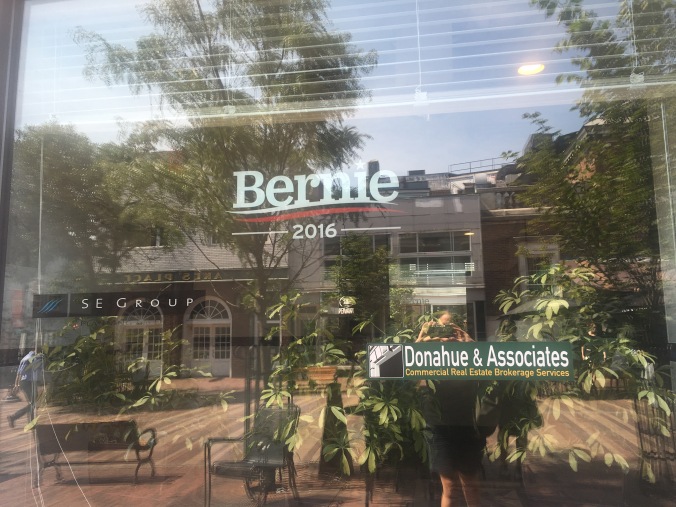 Sue made me a sazerac later that evening, a New Orleans mainstay that I have been wanting to try since watching Treme. It was so delicious. I just wish I’d thought to photograph it. Here is the recipe:

The next day, Sue and Rob suggested cycling the Burlington Bikeway. Rob had to head to work in the afternoon so he joined us for the first section before retracing his steps, while Sue and I continued on, taking in the Burlington waterfront, the causeway (which comes to an end 1-2 miles on from where we chose to turn around, with a ferry service connecting you to an island if you wish to continue your ride), and the Winooski River, rewarding ourselves for our 20+ mile bike ride with some beers at the Switchback Brewing Company Tasting Room upon completion. 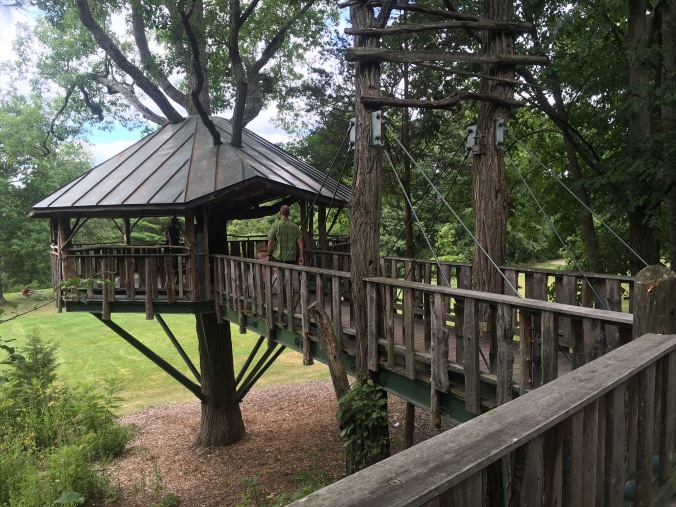 A treehouse marking the southern terminus of the Burlington Bikeway

Earth Clock – stone circle with a view. There’s Sue in the middle, trying to determine how the clock works, with Rob looking on from his bike. 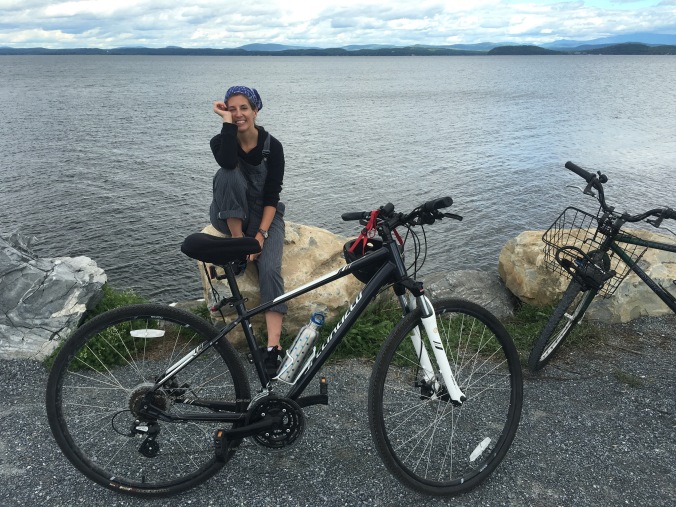 Sue at the midway point of our ride

Lake Champlain has it’s own folkloric lake monster (like the Loch Ness Monster), that the locals refer to as Champ, with monuments to him in evidence all along the foreshore. Here is me climbing one such monument.

The tasting room is similar to cellar door wine tasting, only for lovers of beer

Burlington has turned the tasting room concept into a fine art, with at least 20 craft beer establishments currently in operation, most of them only large enough to serve local clientele. They have banded together, forming something of a local alliance, and developed a fun beer passport stamp system (similar to that which has been employed on hiking trails and in the National Parks), whereby each brewery has its own unique stamp that the patron can collect. Once enough stamps have been collected, they are redeemable for beer-related merchandise. There is a wonderful atmosphere in these artisanal establishments, an ethos of supporting local talent, generated in equal part by residents, visitors and the businesses themselves. This is a community in which small, intimate and authentic spaces are being championed and celebrated in the face of our increasingly homogenous and corporatised world. I call that a win.

At Switchback, flights of beer are served on wooden blocks carved in the shape of the State of Vermont

After dropping the bikes at home, we grabbed a bite to eat at the St Paul St Gastro Grub Pub, then arrived at Zero Gravity just in time for last call.

Zero Gravity last call – one of everything please!

Rob was able to take the next day off at work, so after relaxing on the back deck with a cup of coffee, the three of us headed to Mt Philo State Park, where we summited the mountain via the Devil’s Chair, for amazing views across the lake and down into the Green Mountains of southern Vermont.

More beautiful views from the summit of Mt Philo

Relaxing at the summit

After climbing our mountain for the day, we stopped by Fiddlehead Brewery for some more tasting, to fill Rob’s growler, and for a fun-four-pack of a beer called Mastermind to go. (Unfortunately I neglected to get a photo of the growler, but essentially, you can take a bottle with a four pint capacity into the taproom and they will fill it with a brew of your choice. Awesome.) Rob told me there was also the crowler (which I’d heard of but knew not what one was). You can read more about those over here if you’re interested in expanding your craft beer vocabulary 😉.

While we were there, we ordered delicious wood-fired pizza from Folino’s (which is conveniently located right next door to the taproom), then headed home to eat our pizza and drink our beer on the back deck. 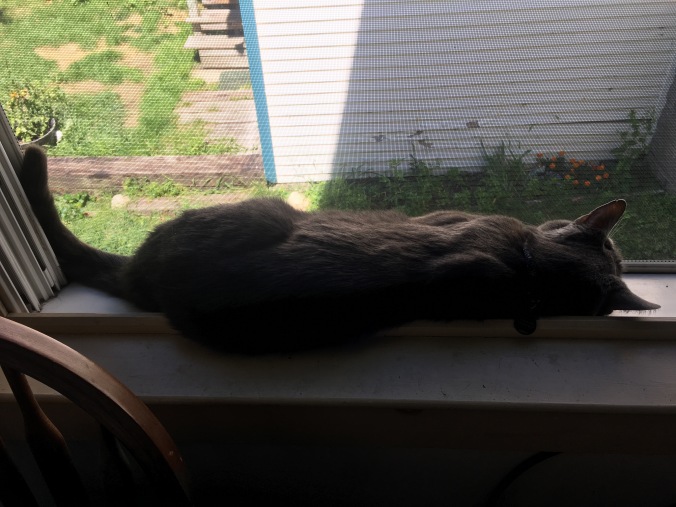 This is Duncan. Sue and Rob have three cats living with them, each displaying varying levels of shyness (Hoover, for example, hid in the basement for pretty much the entire duration of my visit until this morning when he snuck past me while he thought I was sleeping, while Phoebe would freak out and hide whenever I arrived only to re-emerge later), but Duncan warmed to me pretty quickly and went about his business with or without my presence

Duncan getting his Gizmo on

After lunch, we headed back out to Magic Hat Brewery for (you guessed it) more tastings!

This place has the appearance of the psychedelic 60s with a 90s grunge soundtrack, and one wouldn’t be at all surprised if the guys behind the bar started quoting lines from Dazed and Confused

Of all the local breweries, Magic Hat has the largest distribution, and you can take a self-guided tour of what goes on behind the scenes, revealing an immense operation. Here, we were watching their bottling, labeling and boxing process. Their #9 beer is nationally acclaimed (and perhaps even internationally? Correct me if I’m wrong guys and gals). I’m told I may be able to find this particular beer elsewhere on my travels. One can live in hope… (Sue said this scene reminded her of Laverne and Shirley 👍)

​​
After we’d toured the premises and sampled near everything they had on tap, we returned to Switchback so Rob could try the Berliner Weisse stoplight flight (with the Woodruff syrup), then we headed down to the Burlington Bay Market and Cafe for a creemee (maple syrup infused soft-serve ice-cream), a Vermont specialty. This is the stuff dreams are made of.

Our final stop for the evening was the Foam Brewing Company, where we had one last beer. 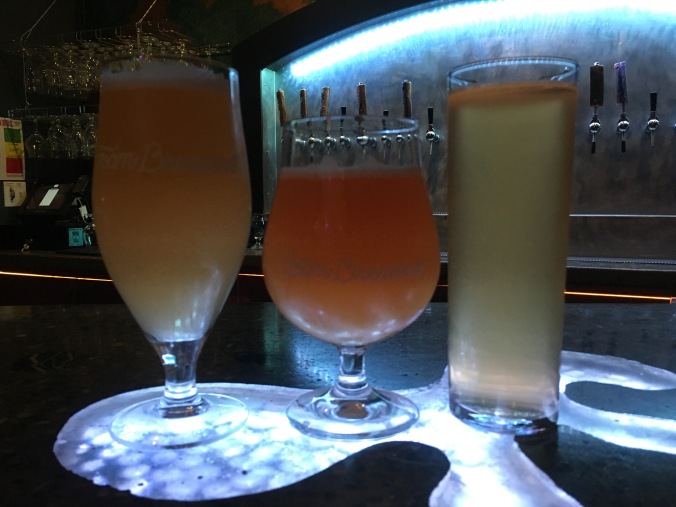 The Freak Incident, The Nameless, and Disco Lemonade. Cool names and funky individualised glasswear. This was also the place where I was given my first taste of the quirky fun sounds of Phish, a band I will definitely be following up on.

For my last day in Burlington, Sue and I decided to spend an afternoon at UVM (Universitas V. Montis: University of Vermont), where she is a Psychology Prof. Sue spent the time preparing for next week’s resumption of classes while I explored the library, some of the old buildings on campus and found a patch of shade under a tree where I lay down on the grass, caught up on some emails and watched the squirrels frolic. 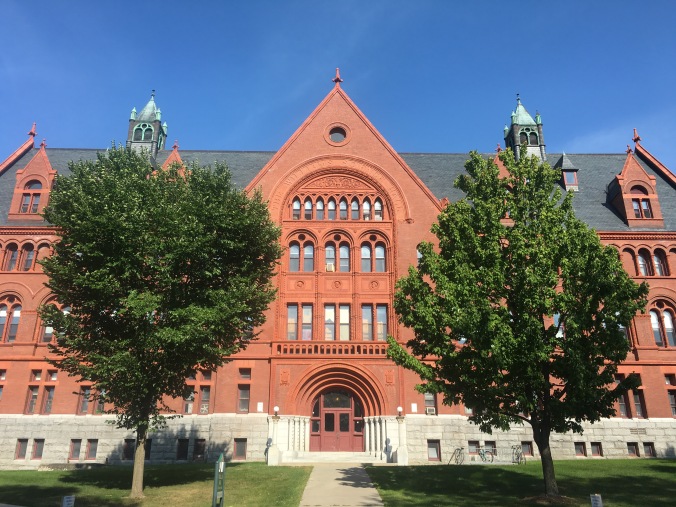 This place has been around awhile. I’m hoping I soaked up some smarts through the grass…

We dined at Sweetwaters in the Church Street Marketplace for our last evening, then Sue brought out the Absinthe fountain and we watched video footage shot during our time at Murdoch University in Western Australia in the mid 90s. It was cringeworthy and uncanny but so very nostalgia-inducing. I didn’t even recognise Sue when she first appeared on screen! Yet in my mind, to look at her now, she hasn’t changed one bit since those days. And anyone who has ever seen old footage of themselves knows how disturbing that simultaneous feeling of familiarity and strangeness is… Memory is a funny fascinating thing. One thing I can say: We looked far too young to have been unleashed on the world. Sigh. 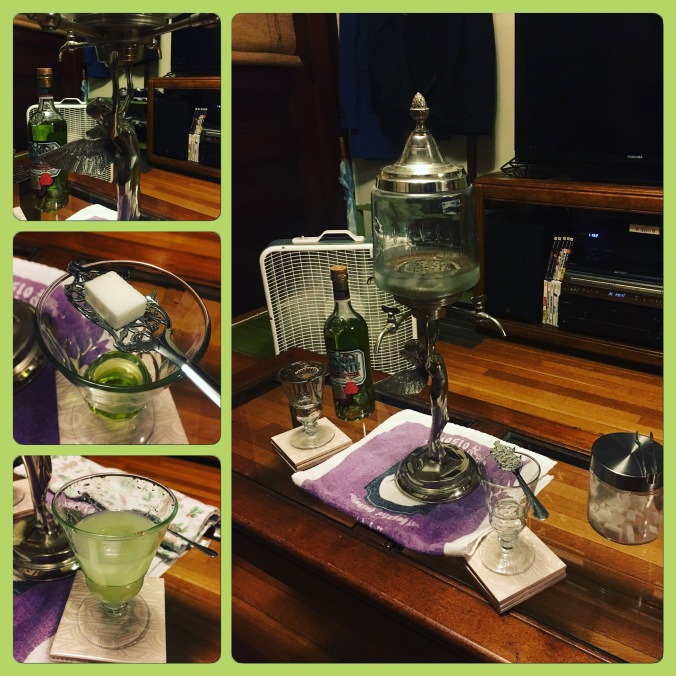 Off to Washington next. Super excited, though temperatures are set to soar. Bye bye Burlington. Bye bye Sue and Rob. It’s been swell!

Argh, too cute. 😻 I miss you and your furry little head, Duncan 😿 (I miss you too Phoebe & Hoover’s shadow ☺️)