It was tough to leave Concord, home to such a ridiculous number of influential C19th authors. Concord has long been recognised for its active participation in U.S. socio-political debate. From the Patriots vs Loyalists to the Confederates vs Unionists, and from the colonial imperative to the Civil Rights and Women’s Liberation movements, Concord has seemingly always been at the centre of political dialogue. 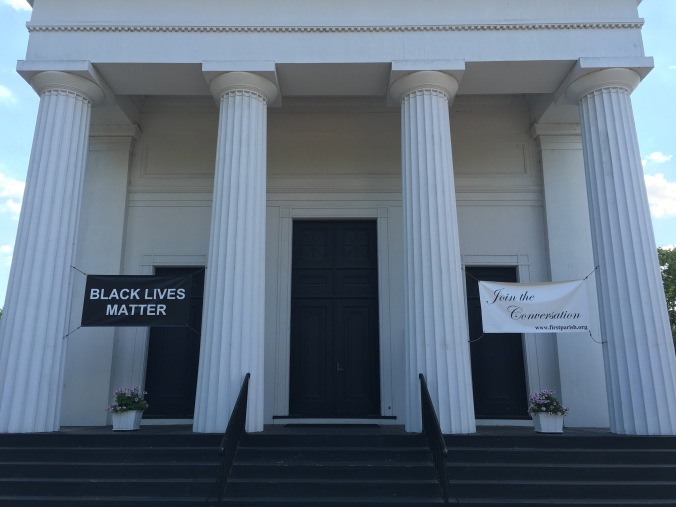 Concord… ever a contributor to the current conversation

Speaking of stimulating conversation, I had the good fortune to meet and get to know several remarkable people on my last day in Concord. While roaming the Authors’ Ridge at the cemetery, I ran into two fascinating women, Robin (from nearby Watertown) and Stephanie (originally from Germany but currently living in Zurich, Switzerland), and they invited me to join them for lunch at the (apparently haunted) Colonial Inn with their equally fascinating friend Axel (also originally from Germany but now splitting his time between the U.S. and Switzerland). 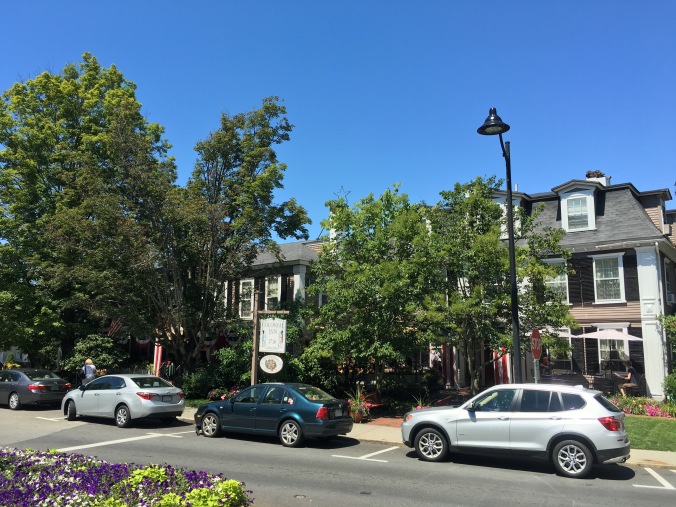 Robin, Stephanie and Axel at the Colonial Inn, Concord

All three were an inspiration to me, having each completed their PhDs in the respective fields of archaeology, the architecture of economic institutions and Ancient Hebrew/biblical studies. We met at Thoreau’s grave, got to chatting and before we knew it, were sharing a meal like old friends. It is to my enduring regret that I was unable to join them for dinner that night at Robin’s house, a meal (promising an abundance of potatoes, a garden of archaeological wonders, and a continuance of excellent conversation) to which I was invited. In lieu of that, however, I encountered a young woman by the name of Brie (also residing in nearby Watertown) and her 6 year old charge Zachary, out for a wander round Walden Pond, in search, like me, for the remains of Thoreau’s cottage (pictured in my previous post). Both Brie and Zach had an abundance of energy and a thirst for knowledge which I found admirable, and before I knew it, we had circumnavigated the pond, examining the stones and plants, ever watchful for wildlife and chatting amiably the whole way. Unfortunately my phone ran out of battery before I thought to ask to take their pics, but I think Thoreau would have approved of our experience of his beloved Walden.

I visited Salem the next day with the intention of learning about the witchcraft trials and general hysteria of the 17th century. Having been warned of the kitschiness and questionable accuracy of the numerous venues, however, I ended up limiting my witchipoo shenanigans to the Witchcraft Memorial and Cemetery. 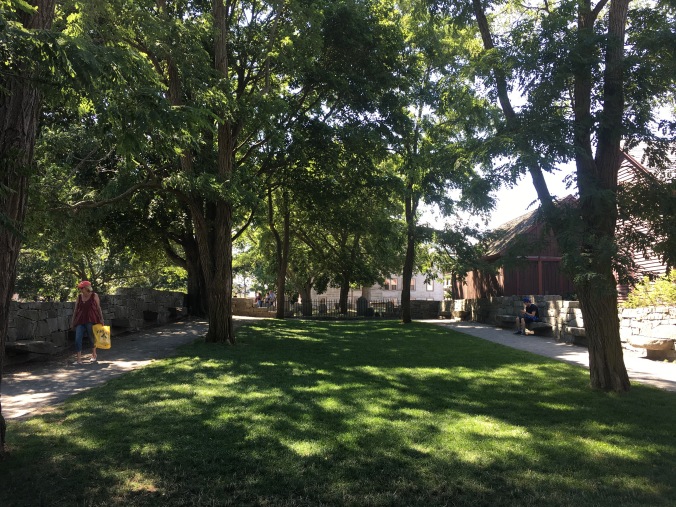 Salem Witchcraft Trials Memorial – 18 people were tried, found guilty and put to death & one other was tortured to death before the community came to its senses and ceased the witch hunt

Streets and scenes of Salem, Massachusetts

I steered clear of the various witch history museums in favour of the Peabody Essex Museum where I had the good fortune of seeing the turn of the 20th century impressionist paintings of Childe Hassam and sculptures of Rodin, as well as a contemporary exhibition examining (micro to macrocosmic conceptions of) scale in nature (including a sandcastle city etched into a single grain of sand – imagine that…). I also visited Nathaniel Hawthorne’s childhood home and took a guided tour of ‘The House of Seven Gables’, the inspiration for his novel of the same name. 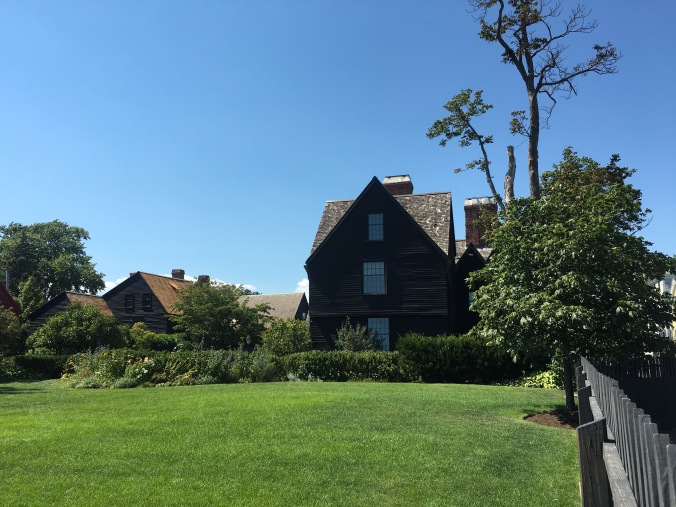 The House of Seven Gables 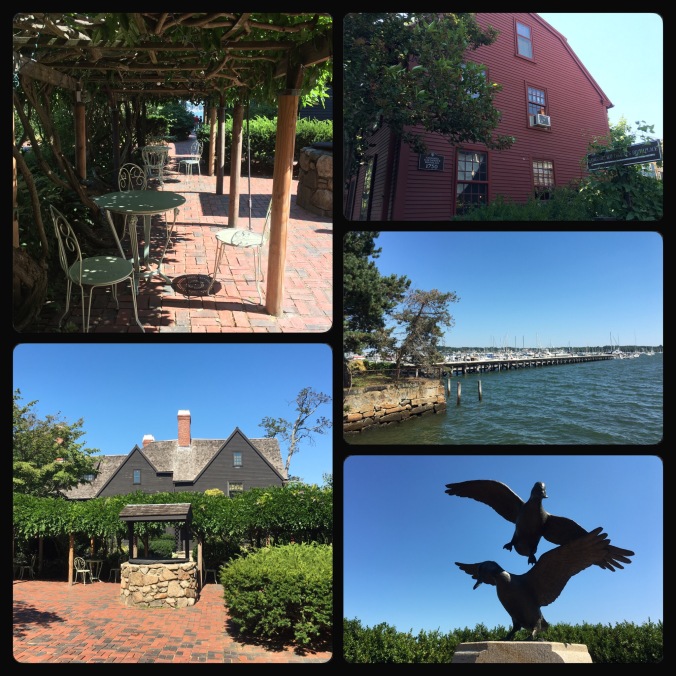 The House of Seven Gables grounds

Continuing north along the Massachusetts coast, I spent two wonderful days in Gloucester, camped in the backyard of Diane Usewick, a local resident (originally of NY) who happened to be volunteering her time at the welcome centre when I popped in to get the lowdown on local hiking trails.

My tent site in Diane’s backyard 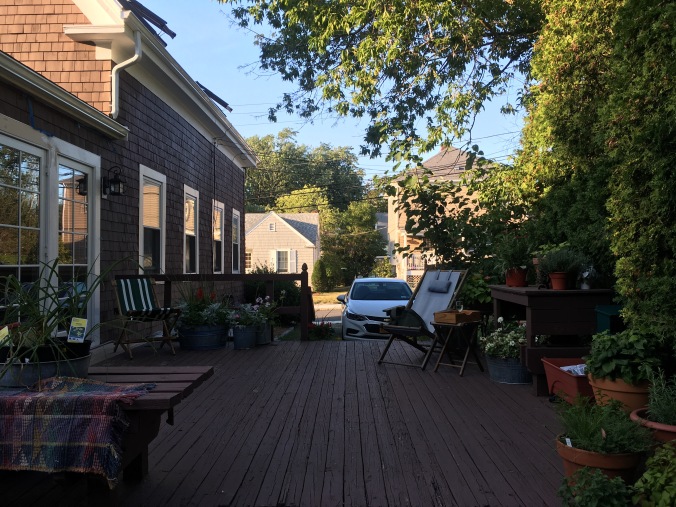 She even provided me with food and wine

She told me how to get to secluded beaches, the location of the oldest continually running artists’ colony and seaport in the United States, and where to go for views and to relax with a book. 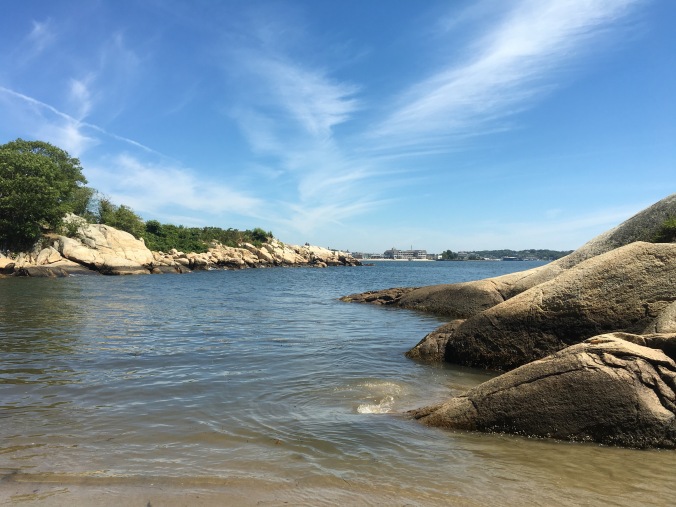 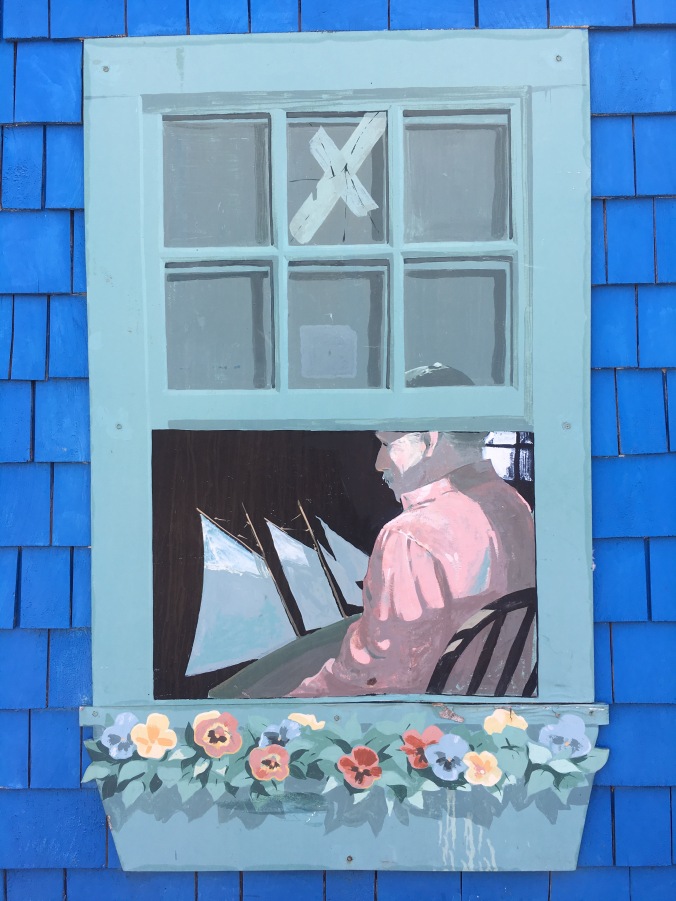 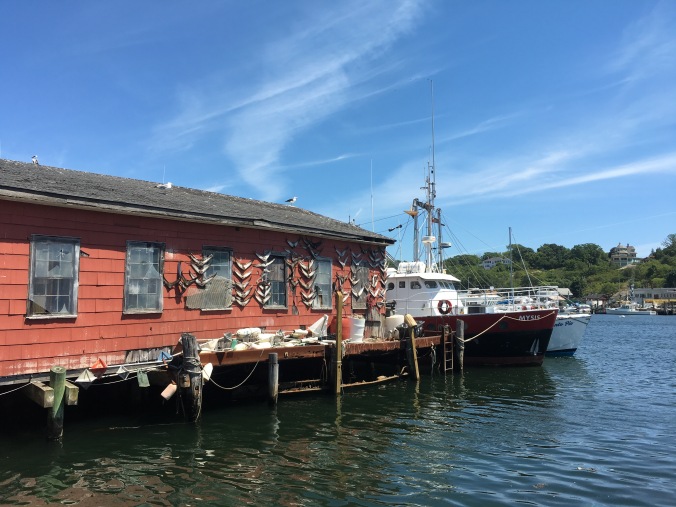 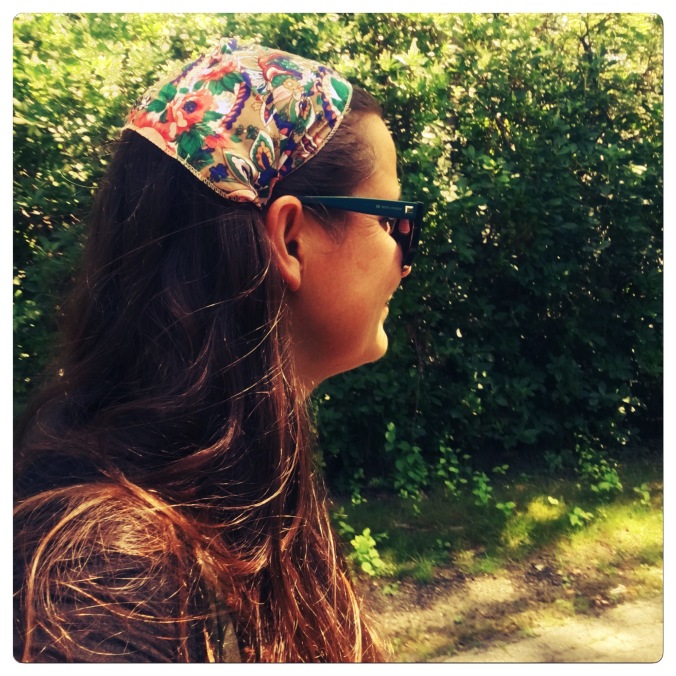 Seeking sunshine and a place to sit in silence

When she heard I was doing a PhD in English literature, she loaded me up with ALL the literature that the visitor’s centre had on the Gloucester region. “Some evening reading,” she told me. Of course, after a visit to a local gallery, we spent the evening cooking and talking so there was little time for reading.

Footbridge to one of Gloucester’s many beaches 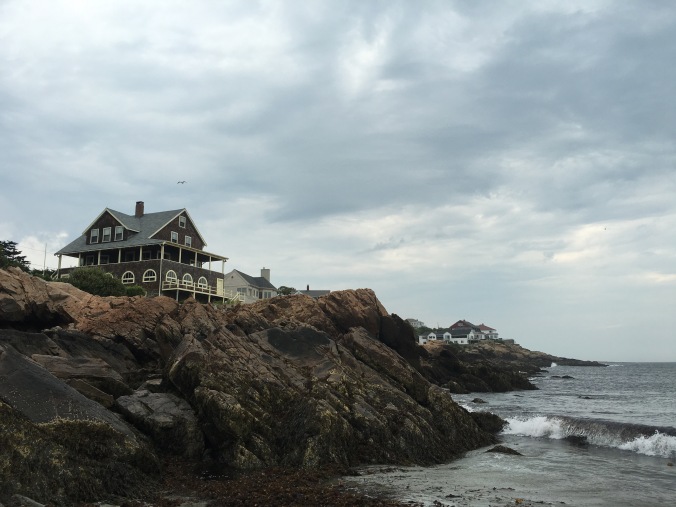 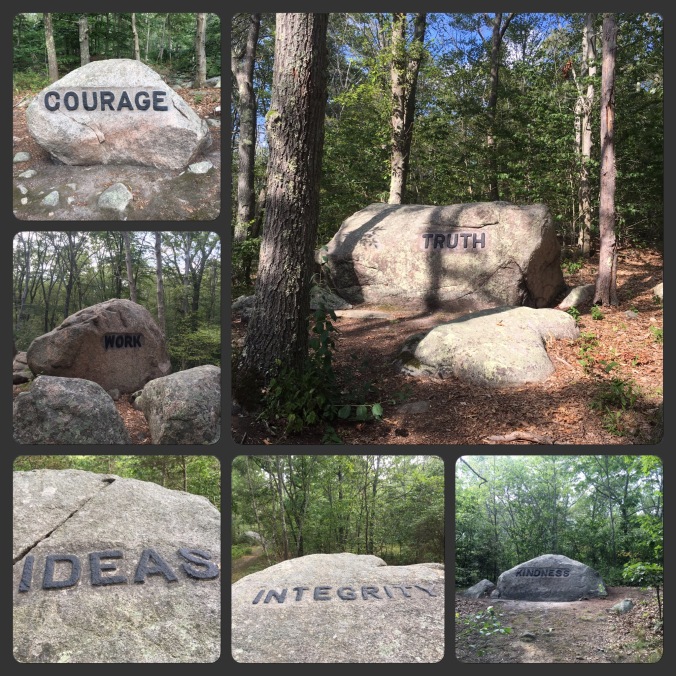 The more I roam, the more I come to realise just how full of amazing people this world is. I love my books, but nothing beats the chance encounter, the serendipity of harmonious timing, and the lasting impression left by the genuine kindness of strangers. Travel engenders goodwill and a desire to pay it forward. Here’s to the stories yet to be told.

Diane on her back deck

After picking Diane’s brains about places to visit in Maine, I hit the road, heading north once more. I originally intended on spending a night in New Hampshire enroute but the traffic was so horrendous along the coast road between Salisbury, MA and Hampton, NH that I jumped on Highway 1 and kept driving until I reached Freeport around 8:30pm. 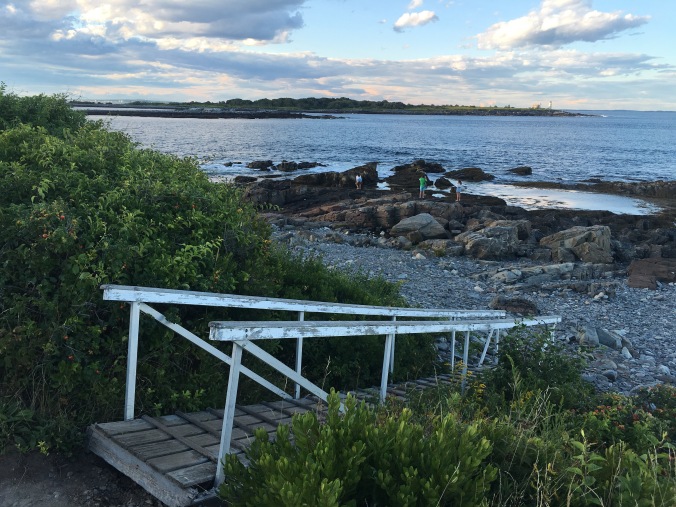 The next day I started exploring the coastal peninsulas east of Portland, Maine, taking in the Cliff Trail of South Harpswell, the pretty fishing village feel of Bailey Island, and Battery Hawley, situated a 20 minute walk inland from the Popham Beach State Park.

One of the viewpoints from the Cliff Trail

The Cliff Trail had a whimsical element in the form of Fairy House Building Ordinances: 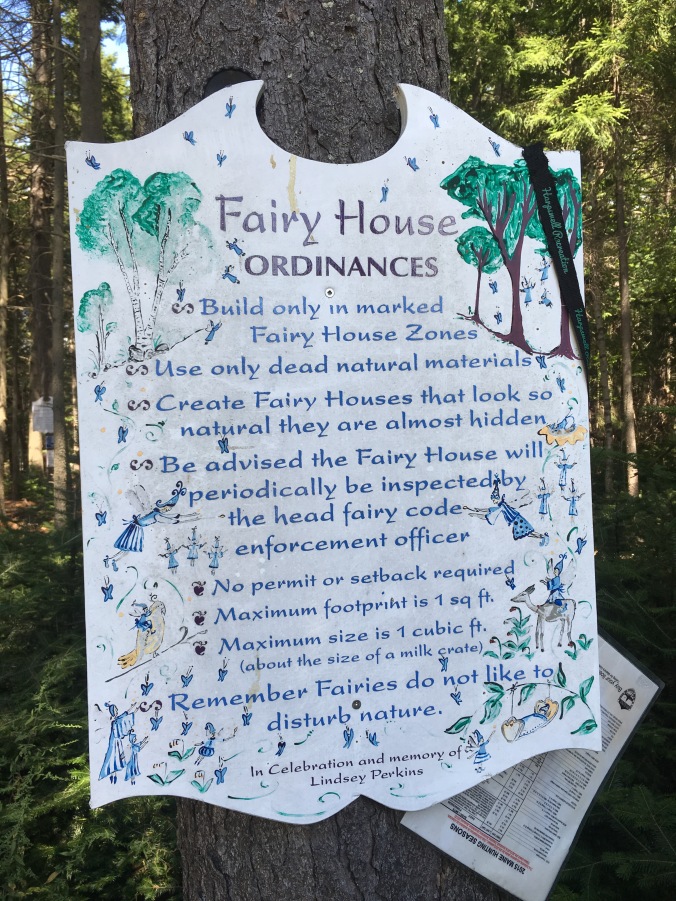 Some of these kids’ creations were mindblowing

Upon Diane’s recommendation, I spent the night at Boothbay Harbour, then headed for the ferry terminal at Rockland and three subsequent nights in the Pink Room of the Victorian Libby House on Vinalhaven Island (complete with fainting bed and authentic 19th century antique furniture), owned and operated by the wonderful Phil Roberts.

Taking the ferry to Vinalhaven 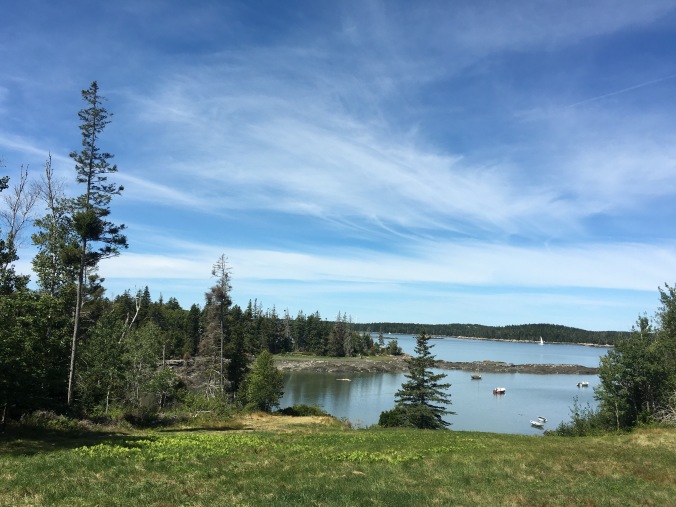 On the North-Western tip of the island, looking towards North Haven, I found a little boat going by the name of ‘Suttree’. As many know, the novel Suttree, by Cormac McCarthy, is one of two primary texts that I am focusing on for my dissertation (the other being Joyce’s Ulysses), but it is also one of McCarthy’s lesser known works (though his best IMHO). I, and all lovers of McCarthy’s work, get ridiculously excited about any references to this novel. As some of you may recall from earlier posts, my friend Wes Morgan, from Knoxville, has an entire blog devoted to this book, called Searching For Suttree, which you can check out here. It’s worth your time (as is a visit to Knoxville if you get the chance). Anyway, I digress… I found this little boat yesterday while the sun was shining and sent Wes an excited message this morning, to which he replied, amongst other things: “Take more pics and a selfie to post.” Excellent plan! The weather had turned by this afternoon, so I returned in my raincoat, took a bunch of photos and asked a passerby to snap me beside the boat. I also wrote the boat-owner a letter and left it in a ziplock bag, asking him/her the origin and significance of the boat’s name and whether s/he’s familiar with McCarthy’s work (of course s/he is!) – I provided both Wes’s and my snail, email and web addresses, so we’ll see if s/he responds.

In other news, Phil (the owner of my current accoms has all but talked me into extending my travels into Canada… 🇨🇦