The next day, Alex dropped me back at the trailhead and I hiked the Watauga Lake section (where the shelter is closed due to bear activity).

More bear notices – these ones with a personal added touch

I moved fast through the area, not pausing to camp, picnic or linger, as per the original sign’s instructions, not stopping, in fact, until I was well past the dam and up on top of the ridge, whose line I would trace over the subsequent two days.

A garter snake sucking on some moss

Arriving at the blue-blazed side trail just before Vandeventer Shelter, I descended the (long) (steep) path to water, realising that ahead lay a stretch, potentially 5 miles or more, with no listed reliable water sources. A difficult climb, but well worth it for the peace of mind an abundant water supply brings.

Over the course of these few days, I’d run into a group of four other hikers (Willow, Pookie, Chatterbox & Ben) at least once a day. They were planning to undertake what’s known as the 33 mile challenge, whereby you hike from Vandeventer Shelter all the way into Damascus. So as I walked on from Vandeventer towards Iron Mtn Shelter, my own destination for the night, they were settling in after a fairly short day in preparation for the massive undertaking that lay ahead. I saw a jubilant Pookie and a less enthused Willow in Damascus a couple of days later, so I know at least 2 of them were successful (though judging from Willow’s limp, I imagine she’ll be taking it pretty easy for awhile).

For my last three miles into Iron Mtn Shelter, there were rumbles of thunder sounding in the distance, but the weather report said just a little rain between 11pm and 5am, so I pitched my tent on arrival, half expecting the storm to pass us by. But as I was talking to a couple from the north, Pam and Tom, the stormclouds were gathering, so after a snap decision to sleep undercover afterall, Pam helped me transport all my gear from tent to shelter, though I left my tent standing till morning. 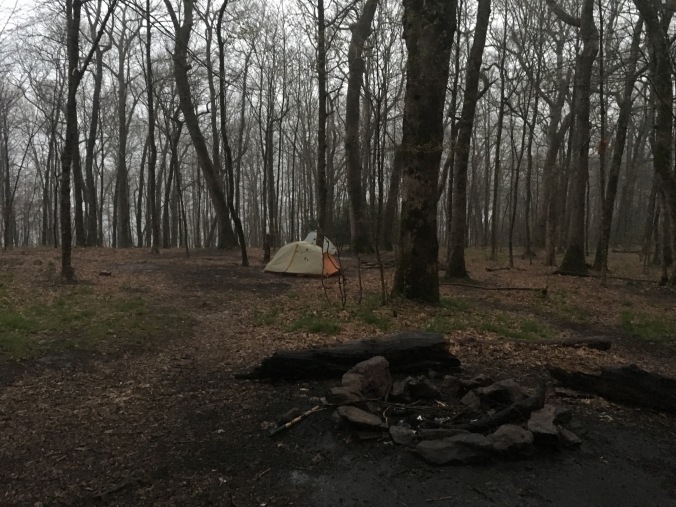 Rain descending at Iron Mountain Shelter (my tent in the background)

We were just in time, and boy did it storm. The lightning turned the sky pink and then the mist rolled in, giving camp an ethereal feel. Between the fireflies and the lightning, north-eastern Tennessee has really outdone itself with its night sky displays of light. It was beautiful to watch from inside the shelter. As the shelters are three sided & this one wasn’t sporting a tarp, I did experience the occasional sprinkle of rain on my head during the night, purely due to the strength of the wind gusts, but I just snuggled further into my trusty sleeping bag and all was well with the world. 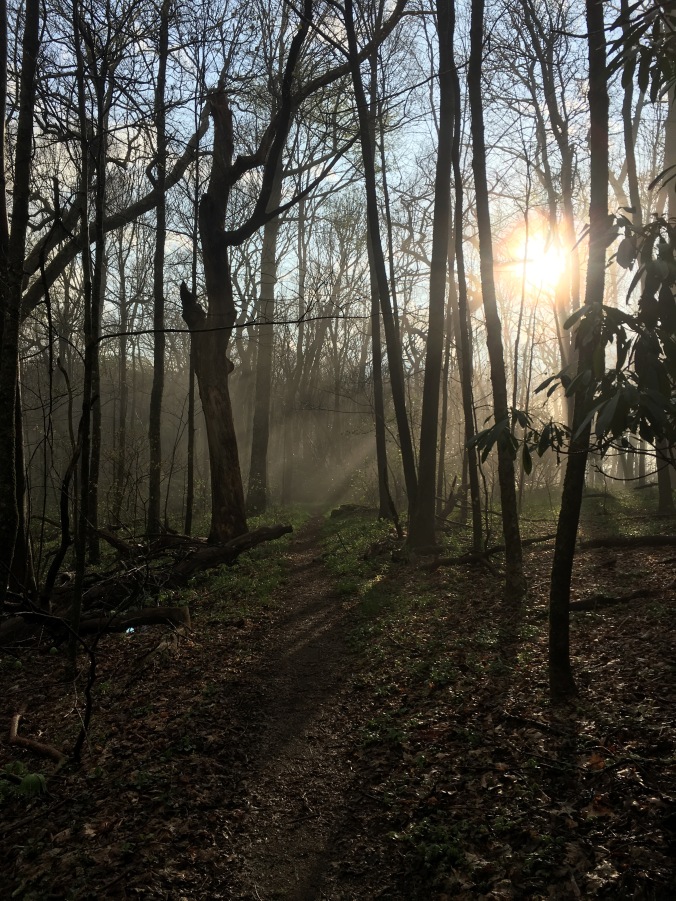 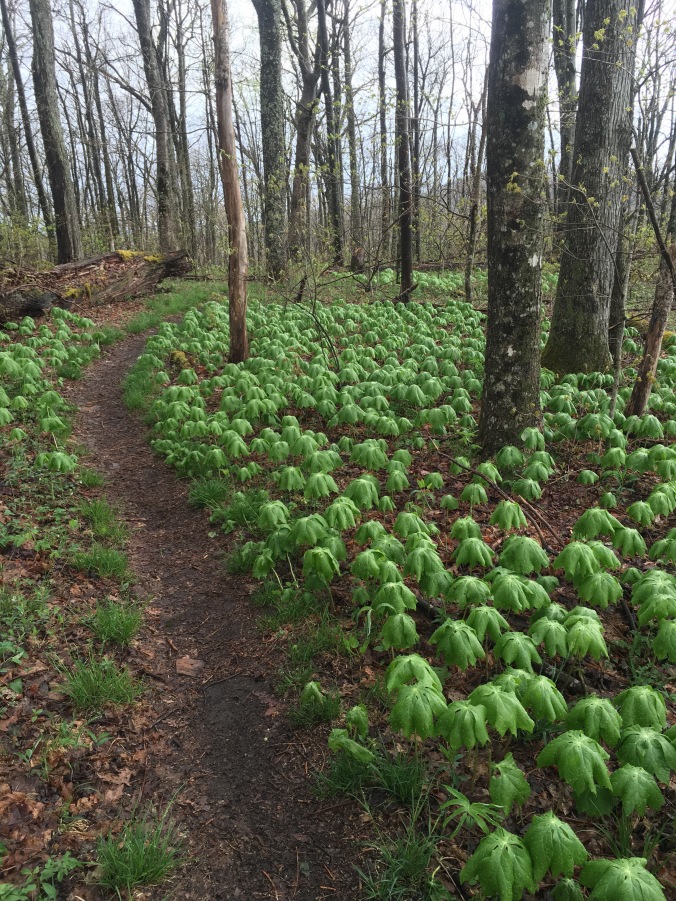 The next day, there was a little rain in my first hour, but I dried out as I walked through the morning hours, arriving at Abingdon Gap mid-afternoon in beautiful sunshine, with plenty of daylight hours left in which to dry out my tent before making camp for the night. 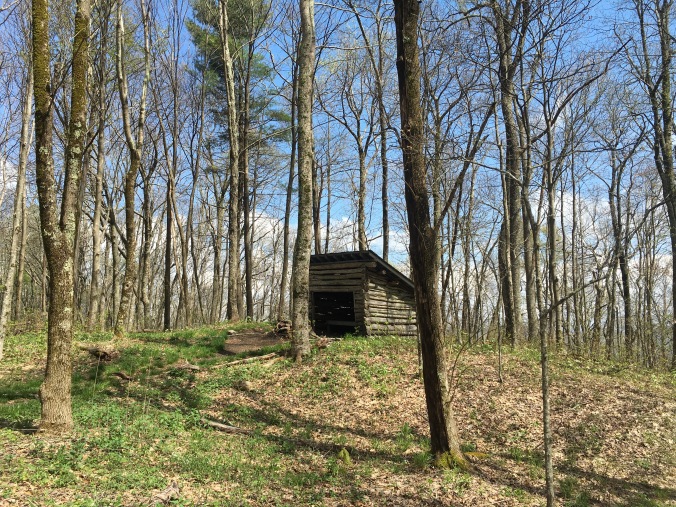 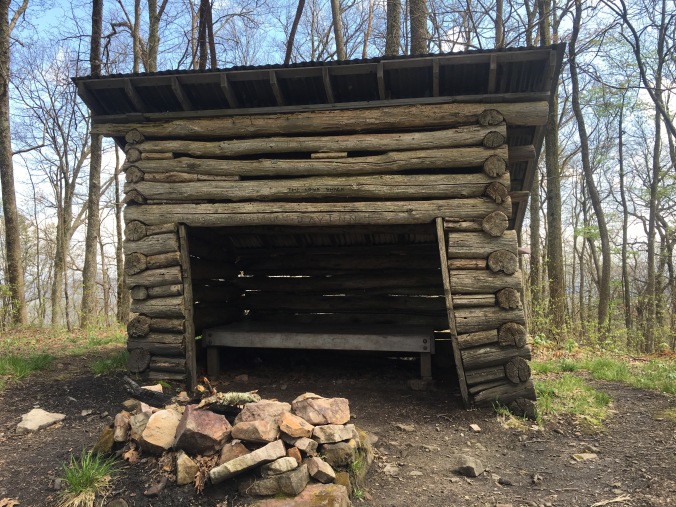 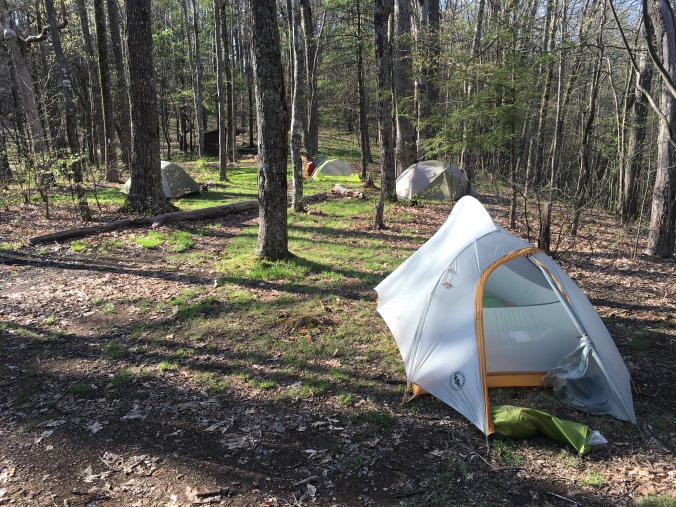 The water source was down yet another long, steep incline, but I only had 10 miles to walk into town the next day, and this pretty little spot was the last camping site before my planned three nights in Damascus, so an extra hill at day’s end did nothing to dampen my spirits. 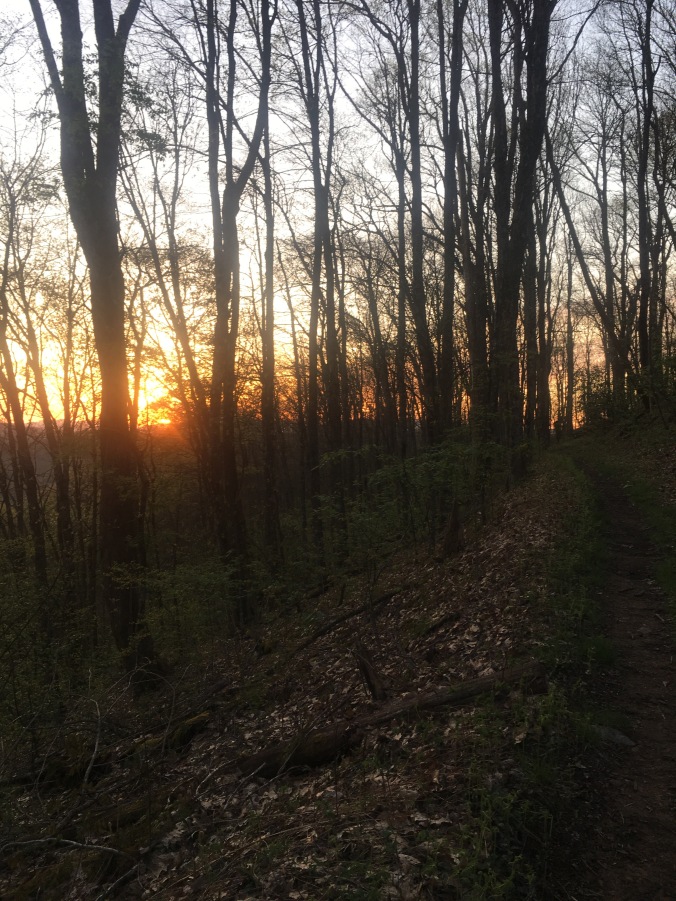 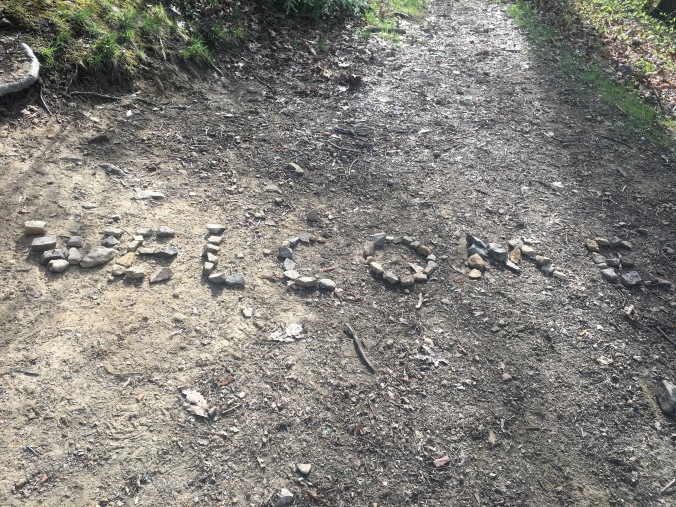 Someone put out the welcome mat

Damascus is a wonderfully welcoming town

Damascus was just lovely. The people were super friendly, everything was in easy walking distance and my accommodation was perfect for my needs.

Montgomery Homestead – my home in Damascus 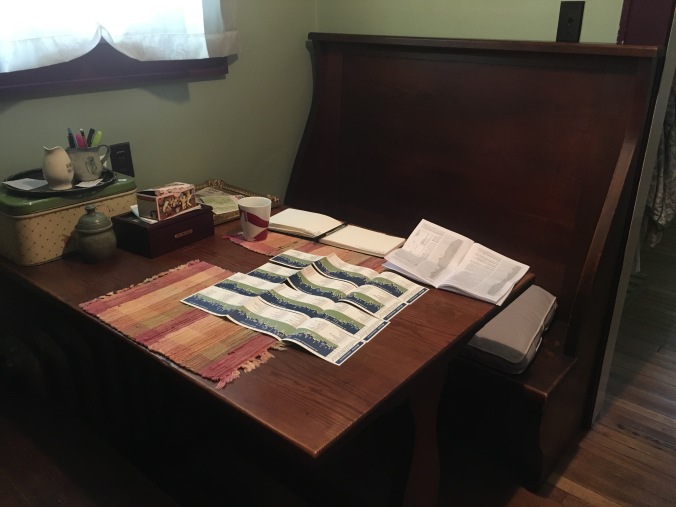 Breakfast nook! (planning my next 500 miles of resupply)

Over my 2.5 days, I had 6 baths, read almost all of a 450 page Barbara Kingsolver novel (Prodigal Summer), breakfasted each morning at Mojo’s and caught up for beers and dinner each night at one (or both 😆) of Joe’s or BoBo’s, with Grumpy (who I met on the second day of the hike, but hadn’t seen since Hiawassee). I also caught up with Junco (also known as Kevin), who I met on my first day of the hike, and who has an amazing wealth of knowledge about local flora and fauna. If you’re interested you can check out his blog, ‘Kevin Hikes’ here. I hadn’t seen Junco since the Smokies, where he was suffering from Shin Splints, an ailment that had grounded Grumpy in Damascus for a week, so Junco (who is also a doc) was able to give Grumpy some good advice.

Look Dad! An angler (well, a representation of one)! 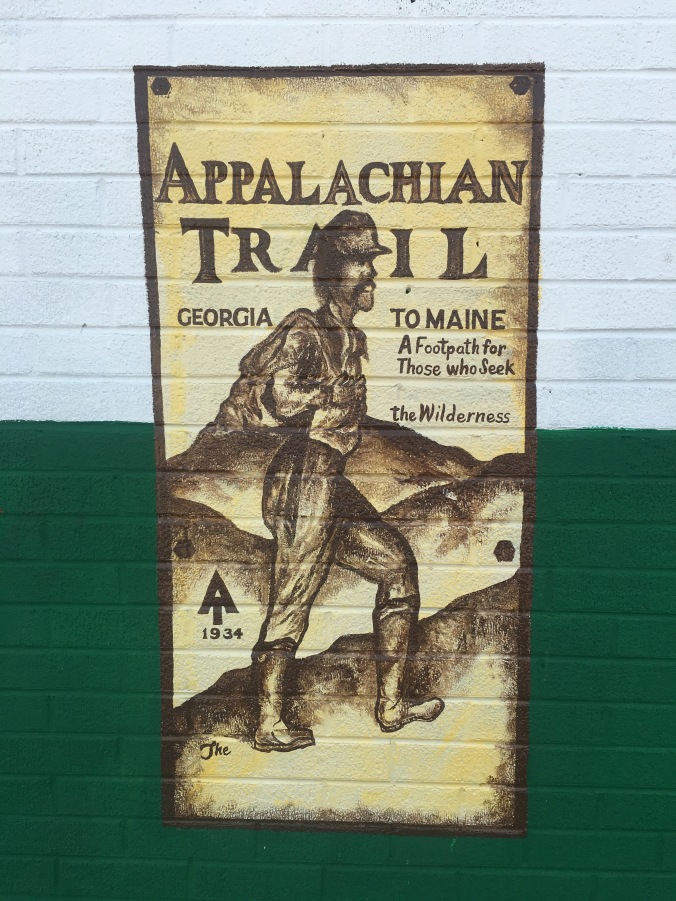 Another painted fisherman. Something tells me people might actually fish these waters. 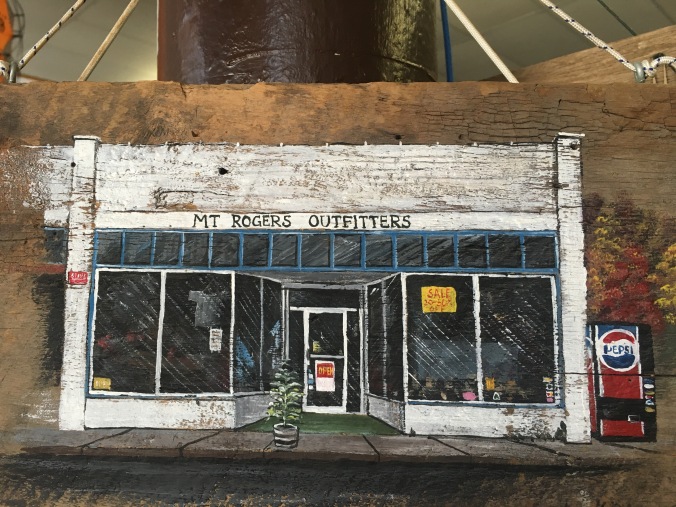 As to my own foot issues, I self/diagnosed myself with a circulation problem, resulting from the fact that my shoes were too tight across the toes. This was causing the blood flow to the extremities of my left foot to be intermittent (hence the intermittent pain). So before changing shoes, orthotics or consulting a doctor, I decided to try simply loosening my shoelaces. Today: no pain. Could it really be that simple a fix? Could I really have avoided 2-300 miles of foot pain by adjusting my laces? Good grief…

a former gymnast with a neverending case of wanderlust