Ok, first things first, a quick recap of events from Days 23-26: Davenport Gap to Hot Springs. After my week of luxury living in Knoxville, Wes drove me back to the trailhead at Davenport Gap so I could continue my hike from the northern Smokies entry/exit. 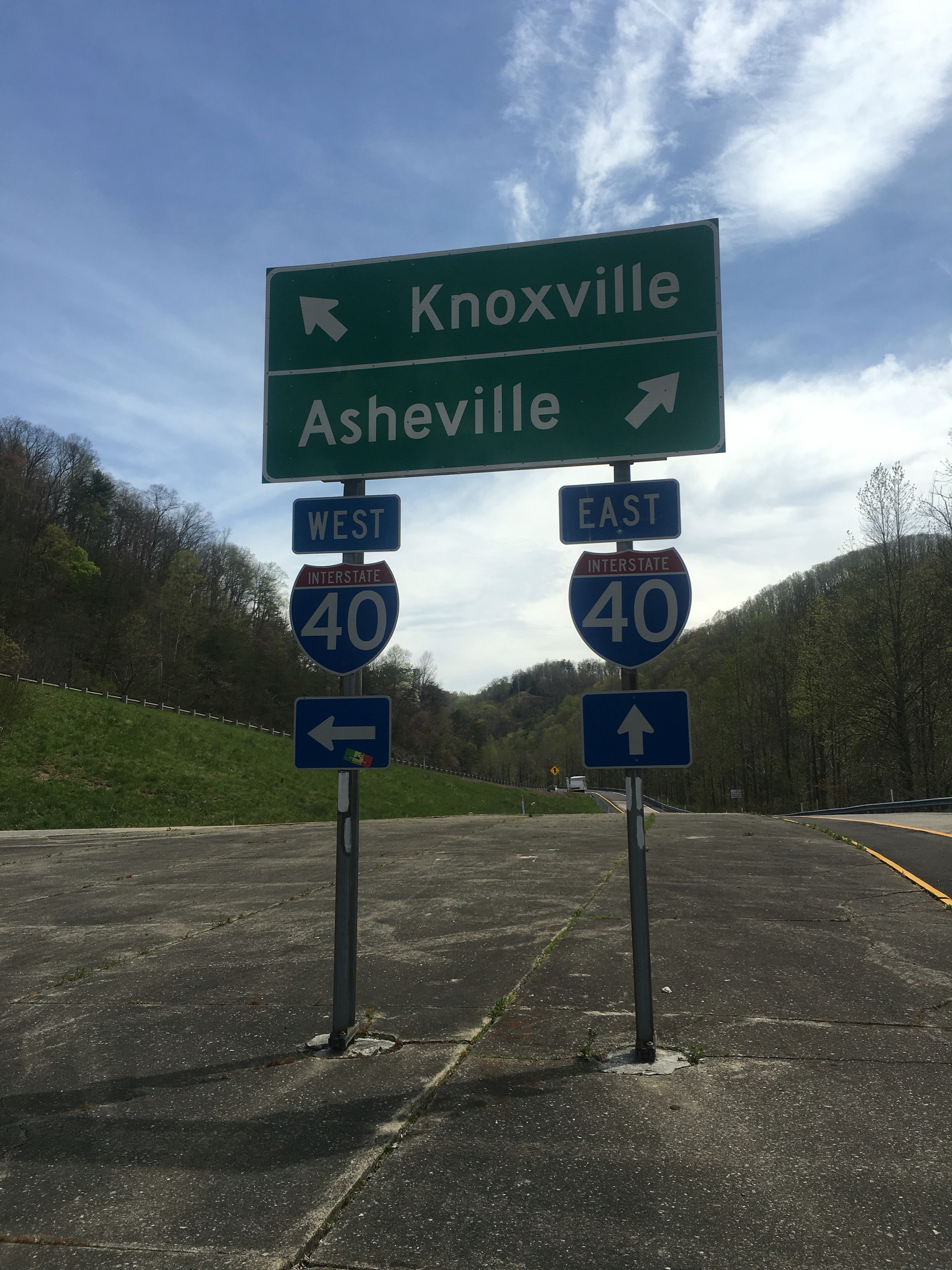 I missed the opportunity to stay in a treehouse at Standing Bear because the hostel was situated only 3 miles into my walk & having just spent a whole week in a hotel, I couldn’t justify another night of paid accommodation, given that I’d hardly even broken a sweat since setting foot back on the trail (though those stairs I included a picture of in my last post went some way towards remedying the sweat/exertion ratio). Here, let me show you those steps again: 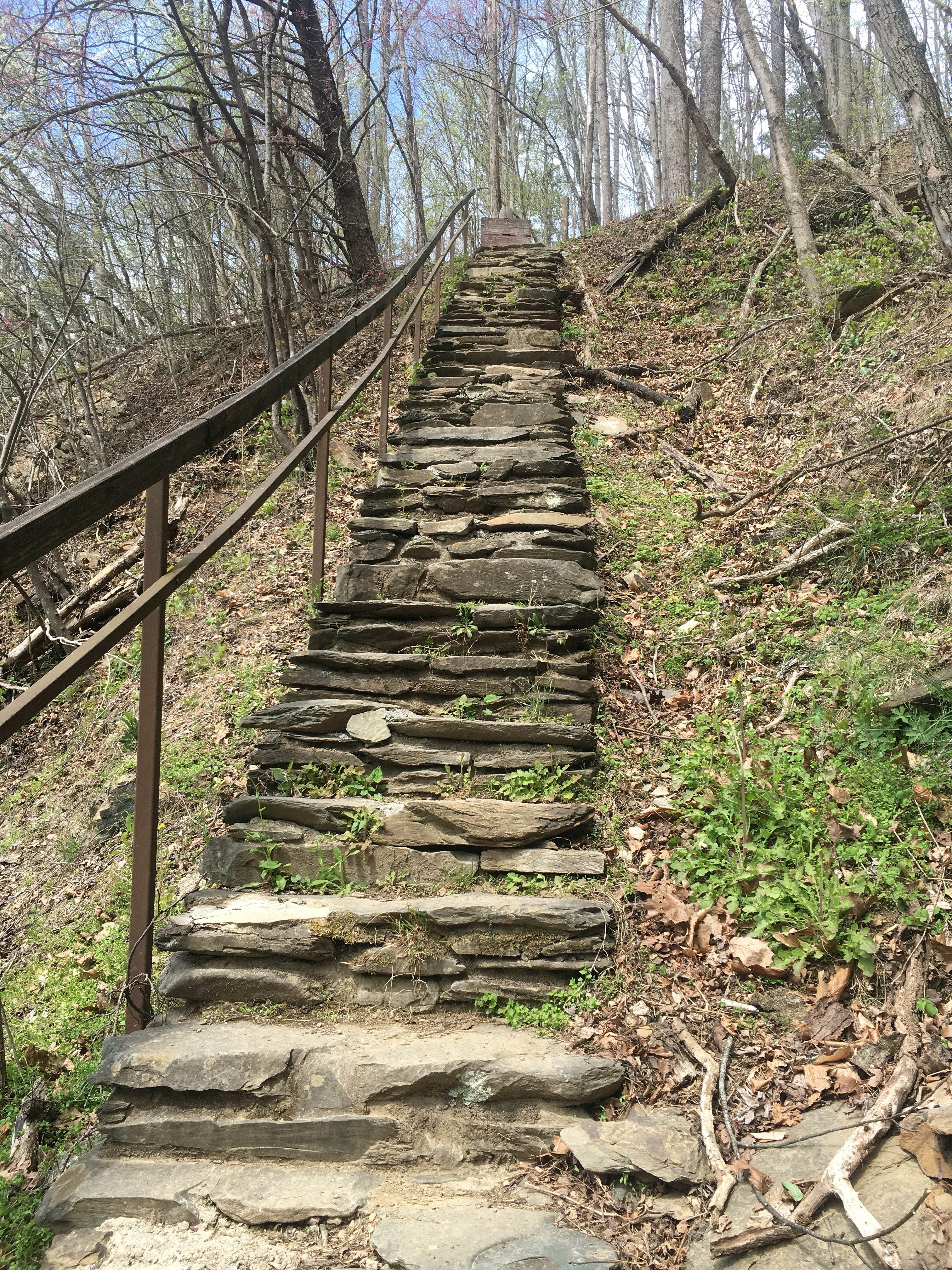 So I continued on, hiking a total of 10 miles to Groundhog Shelter, all of which were uphill. The forecast was for rain, due to start sometime in the night, so I stayed in the shelter to avoid having to pack my tent up in the wet. True to form, the first drops came at about 5am. I rose in the half light to use the privy (which was situated in an awkwardly central location, with tents on all sides and in a slightly raised position – a throne fit for the theatre in the round!) and when I returned, neglecting to use my headlamp so as not to wake other hikers, I managed to mistake the only other shelter dweller for my sleeping bag, patting him on the head with blindly reaching arms. Oops. (I’m sure that in his version of this story, my character has taken on the persona of some crazy hiker lady who couldn’t keep her hands to herself…) Sorry random guy!
I was up and out of camp shortly after 7, heading up a few more monotonous ascents in steady drizzle, and summiting Max Patch in more of the same. Everyone sings Max Patch’s praises. Unfortunately, all I saw of its famed summit was this survey marker and a few feet of foggy grass.

Sum total of the view atop Max Patch

In stopping to photograph said survey marker, the cold and damp did a number on my soaked-to-the-skin body, and I came off that windy hill chilled to the bone. So when I reached Roaring Fork Shelter, two muddy miles later, I changed into dry clothes, climbed into my sleeping bag, and spent the rest of the afternoon trying to getting warm, calling it a day after only 8 miles. Around 4 or 5pm the sun came out and I was miraculously able to get the majority of my clothes dry in prep for the next day’s 15 miler. As a result of this latter longer day, I was able to hike the 3 remaining miles into Hot Springs by 9am the following morning, just in time for breakfast.

Message to hikers from a child resident of Hot Springs

Hot Springs was a mixed bag for me. The town was pretty and the locals were all incredibly helpful and lovely. But I had an unpleasant experience with a fellow thru-hiker who asked to share a room with me (something all thru-hikers [until this point except me] do as a way of reducing accommodation costs). Against my better judgement, I decided to give it a try, believing myself to have been potentially misconstrued as antisocial in my hitherto unwillingness to room-share. It turned out the creepy little upstart had other things in mind than saving $$$s, so I walked out of that hotel around 8pm, taking a much nicer room on my own at the Iron Horse Station Inn, and am now fully convinced that my decision not to room-share has been (and will continue, for the remainder of this trip, to be) the right one.

My room at the Iron Horse Station Inn

I have raged internally at the presumptuousness of the little turd for several days since Hot Springs and am in the process of writing a much longer, more considered response to the events that transpired there (something that I think will be an interesting contribution to the #yes all women discussion), but I’m in two minds about whether this blog is the right place for my further exploration of this issue. For the time being, let it suffice to say that I am a strong, independent woman and I have not let the incident get in the way of doing the walk my way.

I thought briefly about skipping ahead to hike with people I knew and trusted, and coming back to do this section later, but logistically, that would have proven challenging. And besides, I want to walk Northbound, in a (mostly) continuous wandering, winding, weaving line, from Springer to Katahdin (see below for slackpacking exception to this rule). So rather than mess with my schedule, I decided to shake him out of my system and hike hard! I did the next 68 mile stretch in 4 days:

As with previous sections of trail, I have continued to meet awesome people. I’ve inadvertantly pitched next to or near ‘Layers’ (from Quebec in Canada) no less than three times in the past week. And I hiked for a couple of days with the wonderfully humorous duo, Jimmy-John (so named for the restaurant chain of that name originating in Chicago).

It was with Jim & John that I hatched the plan to slackpack over the next big mountain, while having lunch at Flint Mtn Shelter. 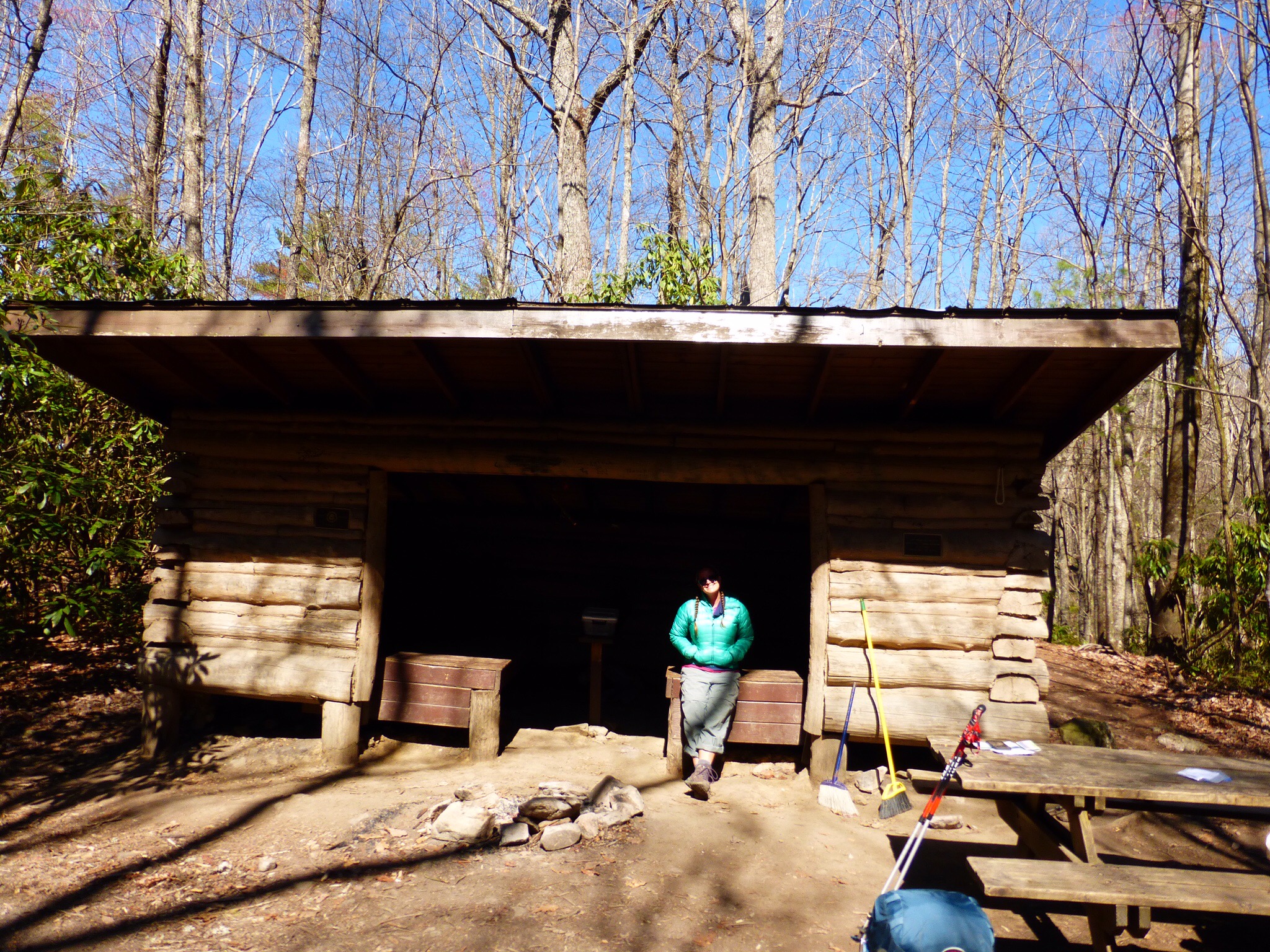 Me hatching the slackpacking plan at Flint Mtn Shelter

We walked to the nearest road and started calling listed hostels in the area, with no luck. But at the very next road crossing, we were met by Jerry, owner of the Hiker Paradise Hostel, who arranged for us to be driven to Sam’s Gap, 8 miles from his establishment, so we could walk back along the trail to the hostel, where we had left our packs.

We decided paradise takes many forms…

That’s a little piece of paradise right there

We’d already done 10 miles that day, with full packs, so it ended up being an 18 miler. Jim suggested that if we felt good after the hike, we try for a 24 mile slackpack into Erwin the next day, with Jerry transporting our packs to Uncle Johnny’s, a renowned hostel that is right on the trail as you enter town.
We did the 24! Phew, what a day! Beautiful views from Big Bald, which made up for the fact that I’d missed Max Patch, and pretty gentle terrain, for the most part. 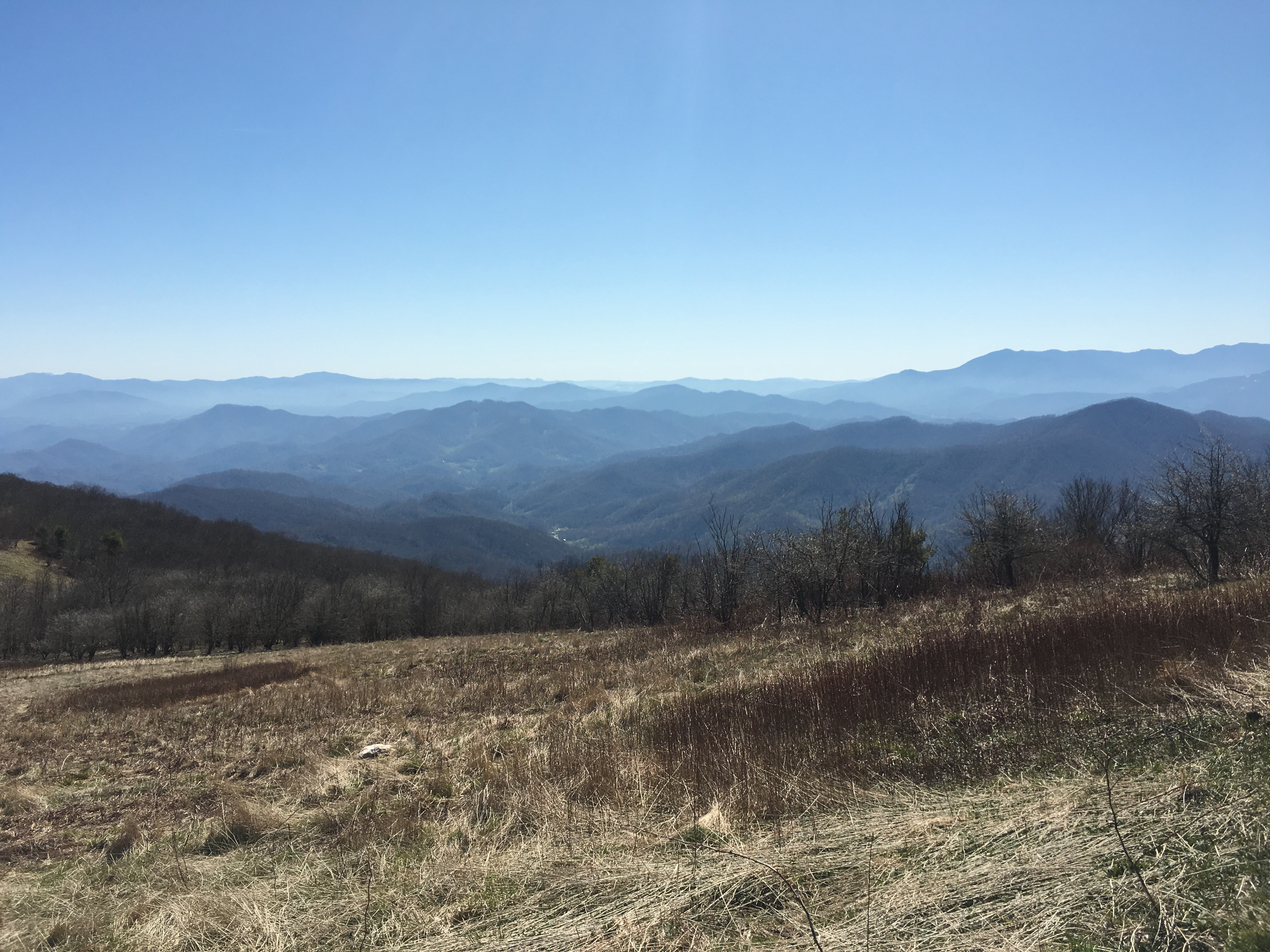 The trail continues off Big Bald in the central distance

I cooked us huevos rancheros & fireroasted vegetables for lunch (by which I mean I added hot water to two bags of pre-prepared mixture) which we had in tortilla wraps with mayo. Delicious!! We paused for breaks each 5-6 miles, finally arriving in town around 8pm. But much to Uncle Johnny’s disappointment, we didn’t stay at the hostel. It was a long day and the hostel was a party venue, not a place of peaceful sanctuary. It was also pretty run down, and after all those miles, I wanted to be able to take a bath, have personal space and sleep in crisp white sheets. The gents shared my sentiments. So it was a further 1.3 miles to Mountain Inn and Suites. A 25 mile day. Woohoo!

Erwin – odd little town. I do not know what to make of the garden ornamentation at this house

Walking with those guys was hilarious. I wish I could have recorded some of their one-liners. They had me in stitches several times over the course of the two-three days we spent hiking together. Jim would remark drily, “They must have pretty loose building codes round these parts, don’t you think, John?” To which John would reply: “Yes, that building there: case in point.” Exhibit A:

John: “What’s wrong with this picture?”

But my favourite moment was when we came across the second instalment of the missing dog saga (sadly, I did not photograph the other two instalments).

This family have apparently lost 4 dogs already this year – in the words of a passing hicker, it might be time to get a fence?

Apologies for the repetition to those who may have seen this pic’n’post on facebook or instagram. (The first note actually asked hikers to beat on the dog or employ whatever means necessary to send the dog running home if they saw it.) Sympathy for boy sans dog aside, quote of the day came from Jim: ‘At least we know what the locals think of us now!’ Don’t know if that dog was ever returned to its rightful owner, but we certainly got a lot of mileage out of that sign…

Don’t let the pretty pastoral scene fool you. When we rang one hostel operator, hoping for a slackpack over the mountain, she said she wasn’t willing to come to this location because apparently people in this county shoot each other!! Yay! Hicker paradise!

Lovely scene for a duel!

NB No hickers were shot in the writing of this post.