I’ve been continuing to hike these beautiful Blue Mountains trails since my return to Australia. I’ve been enjoying the waterfall circuit across the road from where I live almost daily.

I have also revisited some of my favourite walks in Wentworth Falls including the National Pass and the Charles Darwin track, and I did another Grose Valley hike a couple of weeks ago with my friends Kevin and Lee.We descended into the valley at Mount Victoria, timing our hike with a magnificent season of warratah bloom.

As we made our way down to the falls we passed interesting sandstone formations, some of which resembled faces.

This rock is sleepy

Lee and Kevin making their way around the escarpment

We found several other wildflowers along the way and the smell of a sage-like plant filled the valley as we walked (though from what I’ve read, bush sage isn’t native to these parts; you’d be more likely to find it on the south coast of NSW than in the Blue Mountains region). 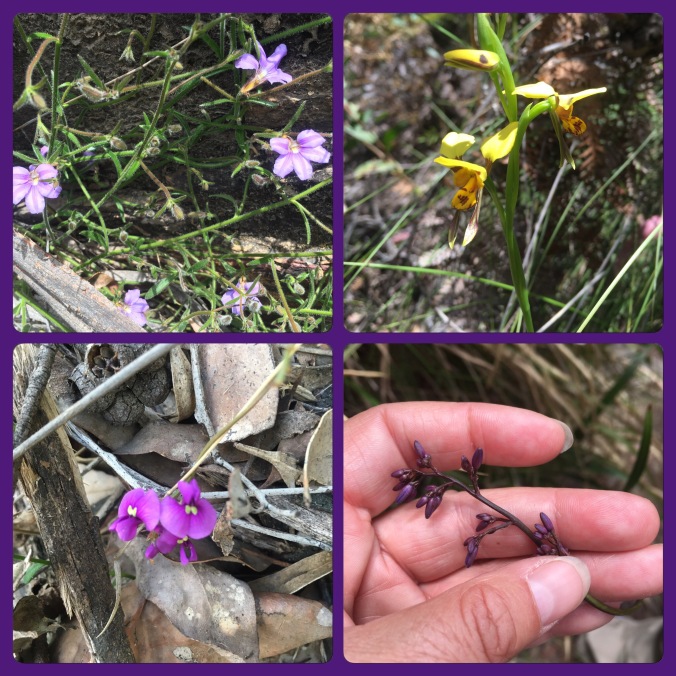 Several examples of the as yet unnamed wildflower samples

The first falls we encountered were the Silver Cascades, followed by the long drop to the base of Victoria Falls.

Kevin and Lee enjoying lunch from the Vietnamese bakery in Hazelbrook, swimming hole at the base of the Silver Cascades, ideal stealth camping site and hanging swamp surrounding the falls

After arriving at the falls, you wind your way along the variable valley floor, sometimes surrounded by towering eucalypts, at other times in moist, fern-filled rainforested pockets, and at other times in grass tree groves, with towering escarpments occasionally coming into view on either side. 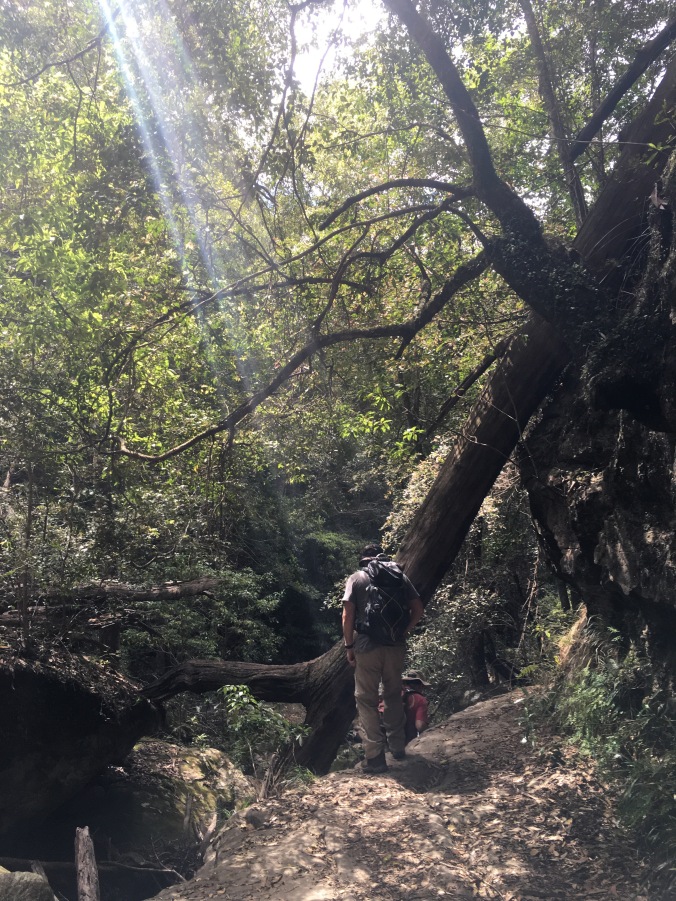 There is only one official campground between the Mt Vic entrance and Acacia Flats (where we camped on our last visit to the valley). Burra Korain Flats is located alongside the confluence of Victoria Creek and the Grose River and would be a stunning spot to pitch a tent, then rest your weary feet in the shallows.

Shortly before crossing the Grose River for the last time (which proved an ideal place for tea and scones courtesy of the gents), we passed through a stretch of trail abundant with grass trees and Sydney Rock lilies (sadly not in flower), with views up to Hanging Rock (not that hanging rock).

Hanging Rock from below (and at a distance)

Check out the size of this grass tree!

The final ascent is considered the easiest pass out of the valley, and it was definitely a gentler climb than Du Faur Head or Rodriguez Pass to either Govetts Leap or Evans Lookout. I am yet to hike the Horse Track (alternative entry to/from Evans lookout), Perry’s Lookdown (the quickest and steepest route) or Orangutan Pass (a more technically hazardous and unmapped entry point to the valley), but now have 5 of the 8 passes into the Grose Valley under my belt. It’s a remote wilderness, but handily close to home. These are the advantages of living in a World Heritage listed National Park.

Last weekend, Frances, Peter and I took the kids to Bondi for ‘Sculpture By the Sea’ to celebrate Dylan’s 18th (!) birthday. It was a gorgeous spring day and some of the art was pretty spectacular. 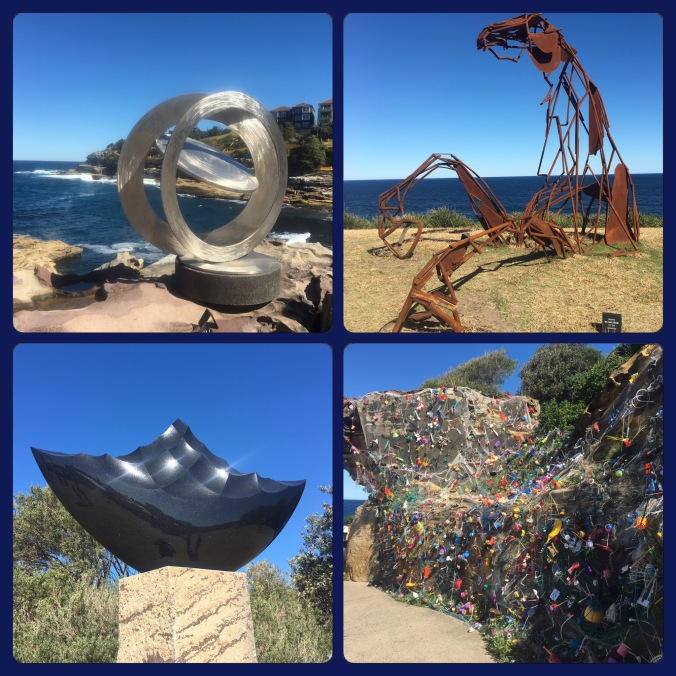 Bondi is stunning. The kids swam and played in the sand while we relaxed on the beach:

I did a circuit around the Nepean River at the base of the mountains called the Two Bridges walk a couple of days ago, in search of mulberries so I could make mulberry pie! 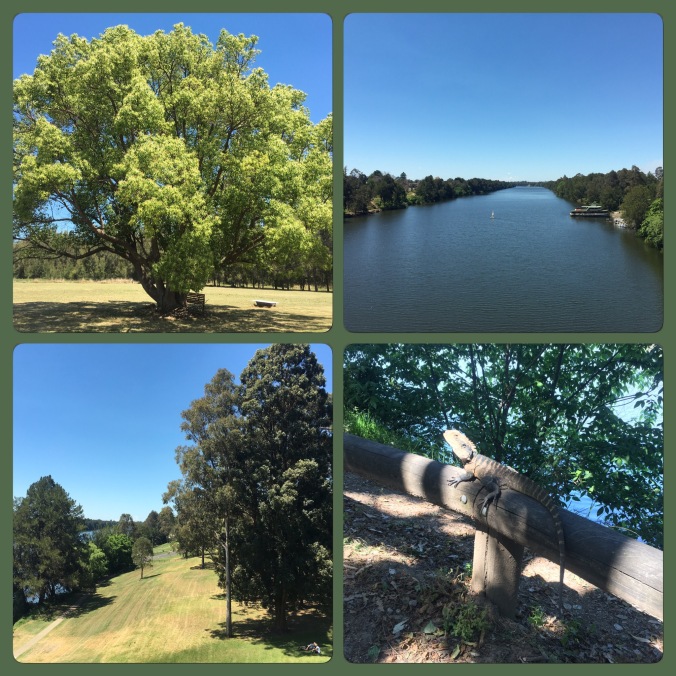 Received a visit from this monkey this morning after she spent the evening playing fisticuffs over territory with the local possum population: 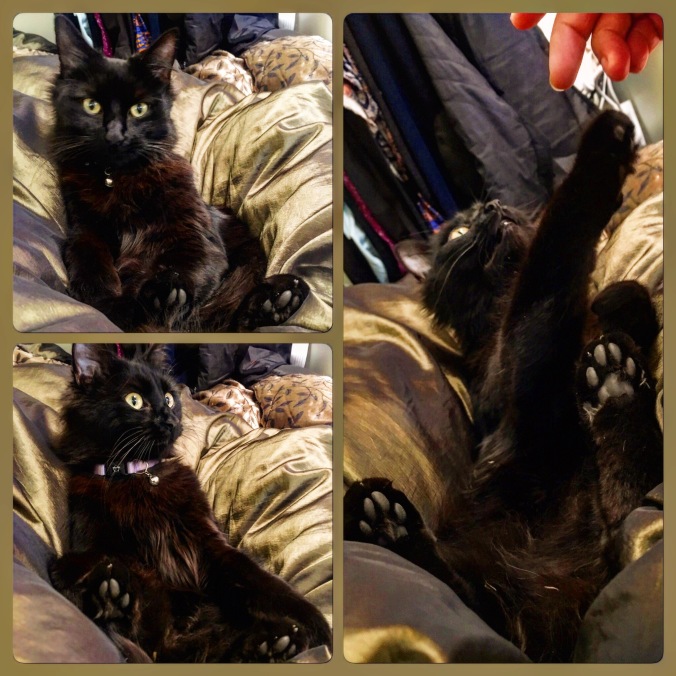 How could a creature with such a cute paw print be so naughty?!🐾

We’re off to Paradise beach this afternoon, and I’m hoping to get out to Hanging Rock tomorrow, so I shall endeavour to update the blog next week some time.👣