Seeing as I am no longer walking in a straight line with Katahdin as my endpoint, I have decided the above format is the simplest and most accurate representation of the ‘miles hiked vs total miles’ ratio that characterises my particular hike.

Having had so long away from the A.T., I have discovered that I am no longer in the mindset of the thru-hiker. Although I have been hankering to get back to the trail, it has become less about pushing for endless miles in order to climb that final summit, and more about getting my strength and confidence back in order to complete the hike (in whatever form it takes) on my own terms. I was determined to not let the injury prevent me from continuing, but I am no longer striving to reach the endpoint.

Ten weeks away means that it is no longer the same hike. I have returned to the trail with the idea that I’ll be walking shorter and slower days, taking more breaks and doing more exploring (both the trail itself and points of interest that lie further afield). If I like a place I will stay awhile and simply enjoy it.

This relaxed mindset was one of the things I originally set out hoping the trail would help me achieve, and I like to think I was getting there before the accident. I’ll never know how close I was to finding my groove then, but I do know I’m a lot more aware now of how best to make the most of this whole experience. I have my broken wristed adventure to thank for this fresh outlook. It has given me a chance to approach the remainder of my hike in a completely new way.

To get back to the trail, I caught the train from New York Grand Central Station to the Appalachian Trail Station near Pawling and Wingdale in NY, just 7 miles from the Connecticut border. 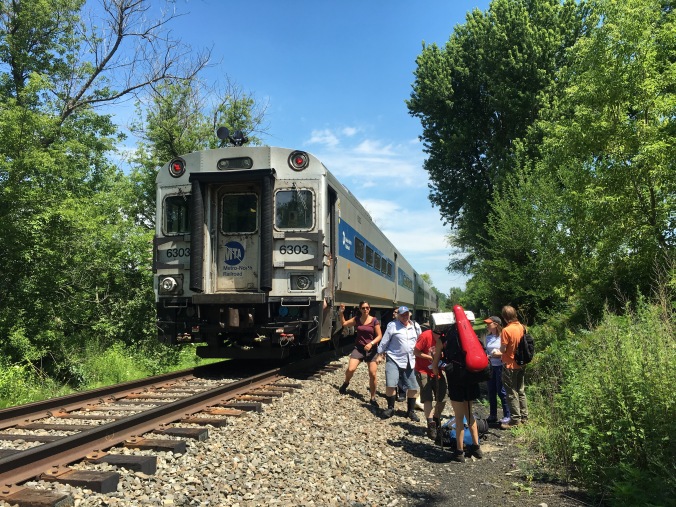 I couldn’t get the grin off my face as I crossed NY22 and wandered, with (ridiculously heavy) pack strapped to my back, into the green fields of New England summer. 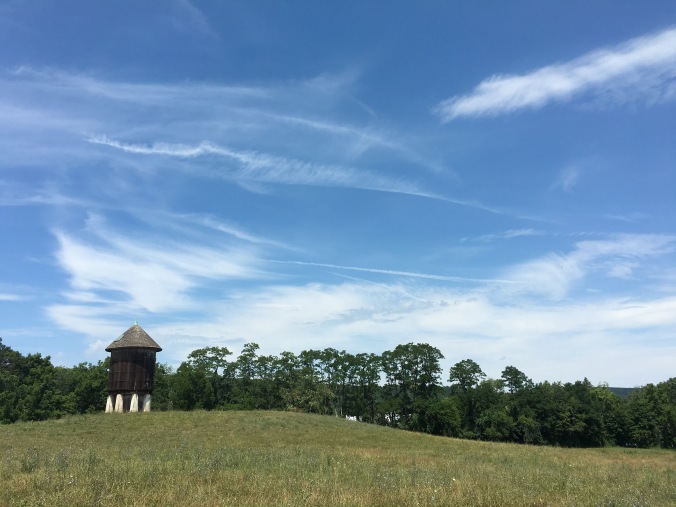 While I was rugging up and playing in the snow back home in Tasmania and NSW, summer struck the States with a vengeance. I’ve been reading about the swelter in friends’ blogs, but nothing quite prepares you for the sweatsoaking that heat plus a high humidity index has in store for you.

I thought about stopping at the first campsite I found, but felt good on arrival at Wiley Shelter, the last in NY State, so I filled up my water bottles at the well and pushed on. Quite an effort was required at the pump, which was an interesting test of strength for my arm! 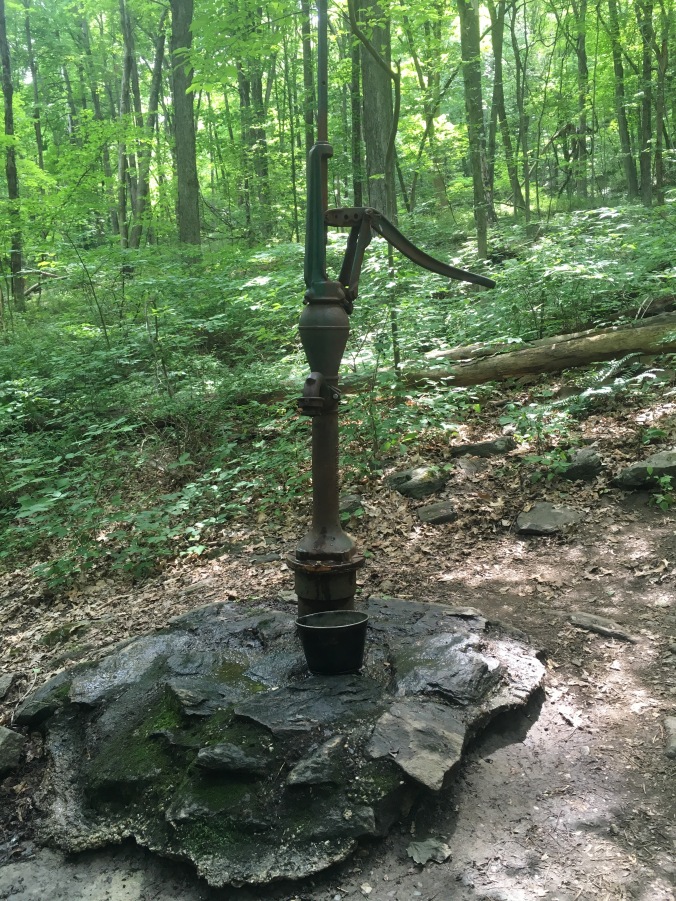 A creek crossing later and I found myself in Connecticut. 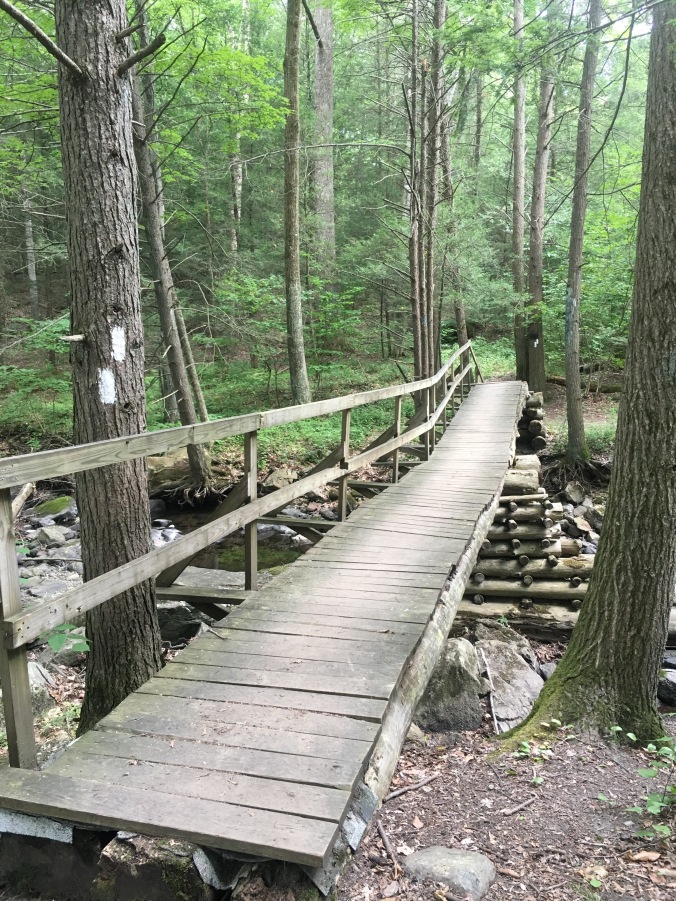 The last three miles to camp were tough, but this was my home for the first night back on the trail:

Lingering jetlag, compounded with the remnants of a cold I’d had since a week before I left Aus meant that I’d only slept four hours the previous night, with the need to be on an early train precluding my new-formed habit of sleeping in. So, after a fun first 10 miles back on the trail, I’d pitched, eaten and was sound asleep by 7:30pm. I was woken with a start by my own snores several times through the night. I imagine it was the bears who were afraid of me that night 😉.

Day two back on the trail looked like an easy 8.5 miles into Kent (plus a 0.8 mile roadwalk). However, there was no water flowing in any of the guidebook listed creeks for the first 7 of those miles and the humidity was even more intense than the day before. So I rationed my water and kept the thirst at bay by lying prostrate on every flat rock at every summit (both false summits and true), so as to bring my heart rate back down to acceptable levels. (This was in keeping with my new plan to take lots of breaks.) 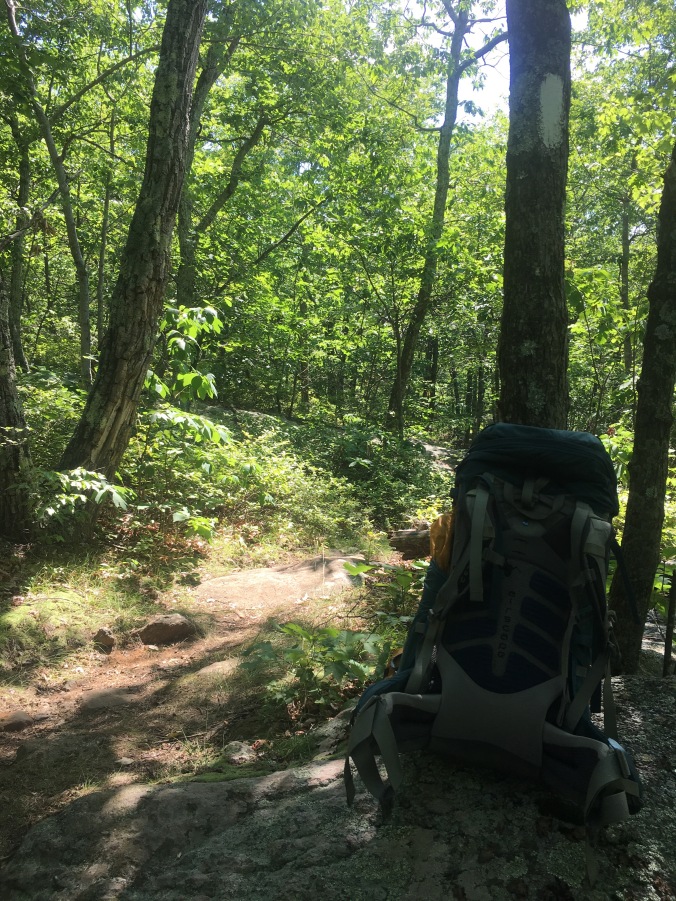 I met a guy called Hammer on one such break, again at the eventual creek (elixir of life), and a third time in town, who, upon hearing my plan to take a potential zero while I waited for mail, said he liked my style and that he should hang out with me more often. (Taking a zero two days into the walk if you don’t mind.) But you know what, it was the best zero I think I’ve ever taken. That 8.5 miles (well, let’s call it 9.5) took me 7 hours (which was in keeping with my plan to walk slower), barely above a crawl, and I still had to have a power nap upon showering (which turned into a 3 hour long dead-to-the-world slumber), which did not stop me from sleeping when the normal time for sleep arrived, or from staying asleep until 11 the next morning. And Kent, the town I took my zero in, is the epitome of New England’s charming picturesque style.

I liked the place so I stayed awhile and enjoyed it (in keeping with that other part of my newfound approach to hiking, life, the universe and everything). Also, there was a big storm in the afternoon, leading me to recite my May mantra, applicable any time it rains and I’m somewhere warm and dry (which, let’s face it, was every day in May): “Boy, I’m glad I’m not on the trail today…”

Plus there was the small matter of there being some mail yet to arrive. Between Wes from Knoxville, another friend Michael from NC, and myself, I had four parcels greet me at the Kent PO over the two days of my stay. The staff just about knew me by name.

I was really taken with the letter boxes in Kent. Even the ones that had been thrown together in a rough and ready manner appeared quaint.

After collecting the last of my mail and reconsolidating my gear, I grabbed a beer and a bite to eat and hit the trail around 2 in the afternoon. As I left town, rather than climb the first big hill only to descend to river level again two miles later, I decided to walk along the river bank for the entire afternoon. I met and chatted with locals out for afternoon walks that I would otherwise never have encountered, and I made good miles without as much strain on my not yet trailfit body. It was also much less humid, which helped. 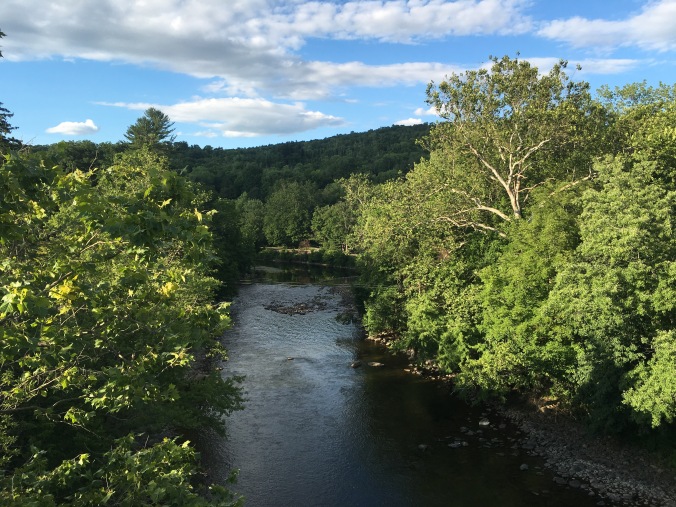 So I didn’t strictly follow the A.T. for my entire day’s hike, but that’s another thing that has shifted for me since the fall. I’m no longer nobo (northbound – although I am still heading north, I can no longer consider myself part of the nobo crew who set out from Georgia and will complete their hikes in Maine), my walk’s already been broken up into at least three discrete sections. And I’m no longer attached to outcome. If I get the whole thing hiked, great! If I don’t, that’s totally cool too. It’s far more important to me that I take in my surroundings in a meaningful way, which may mean allowing myself to get waylaid, led astray, or otherwise diverted, but so long as I continue to meander towards Maine, then I’ll be ok. And my walk will have been my own unique, authentic experience.

Next day, I took a side trip away from the trail and walked the backroads from Cornwall Bridge to West Cornwall in order to see this covered bridge. 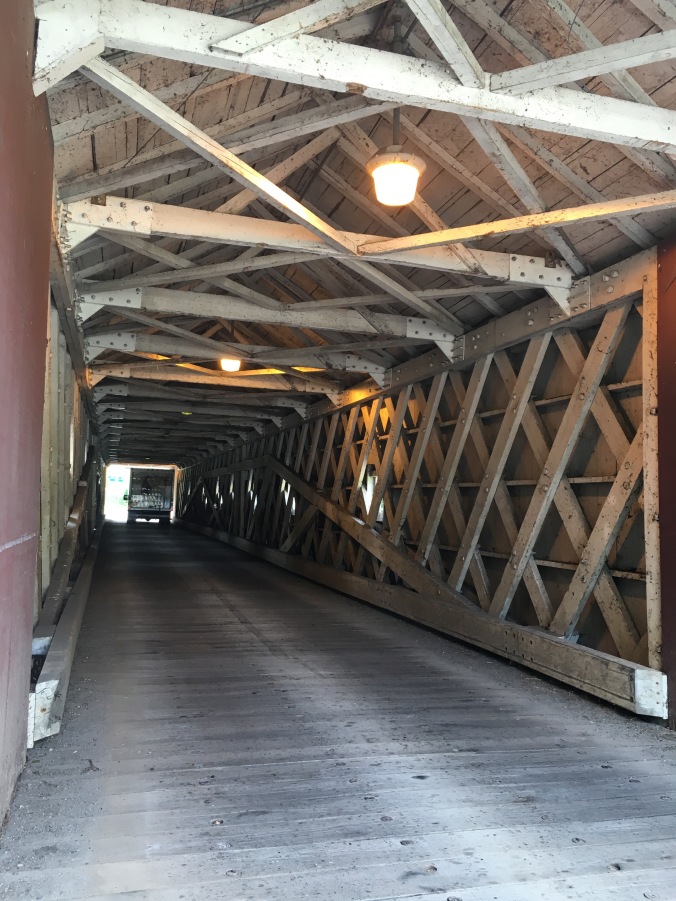 The walk was stunning, with farms, palatial homes, patriots and fun signage: 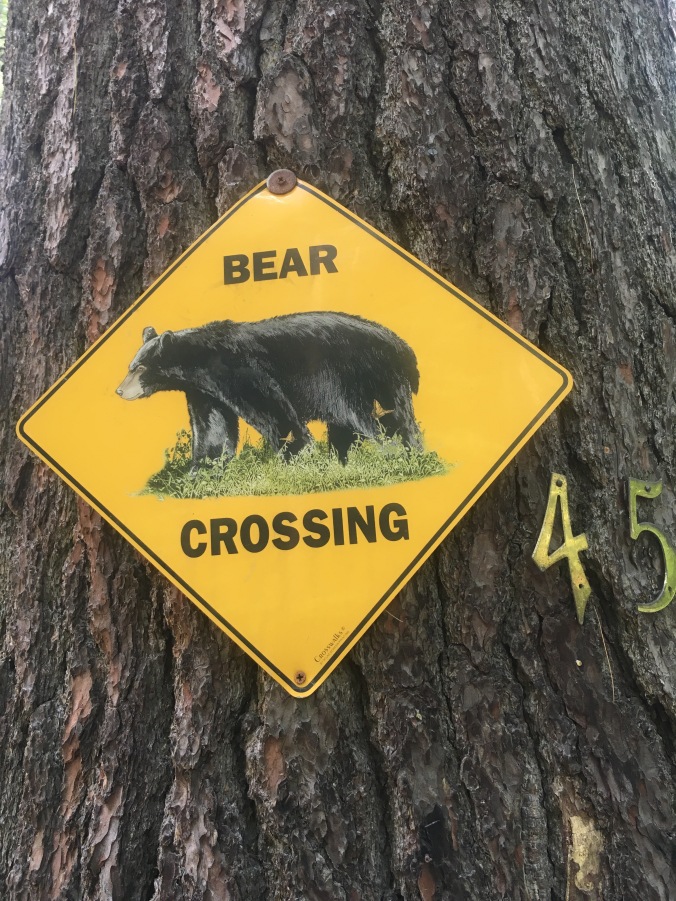 The town was sweet also. 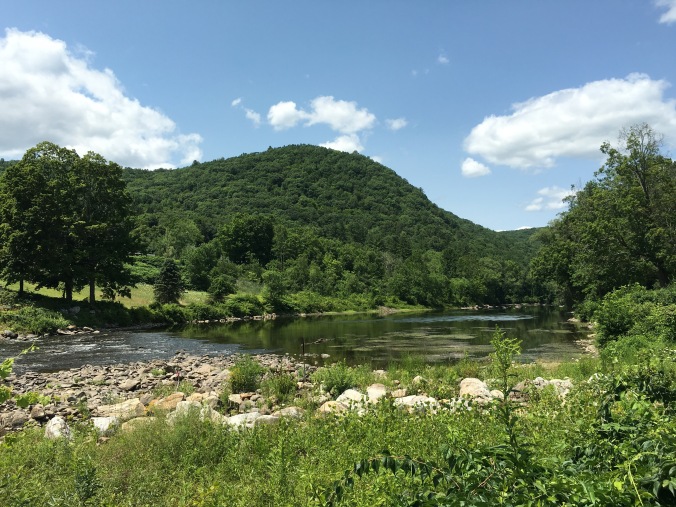 I asked the staff at the Wandering Moose Cafe, where I stopped for lunch, whether Route 7 (the highway) was a safe alternative to returning the way I’d come, and was advised instead to walk the river trail as far as I could and then just follow the railway tracks into town. So that is what I did:

Instilling a Sense of Wanderlust